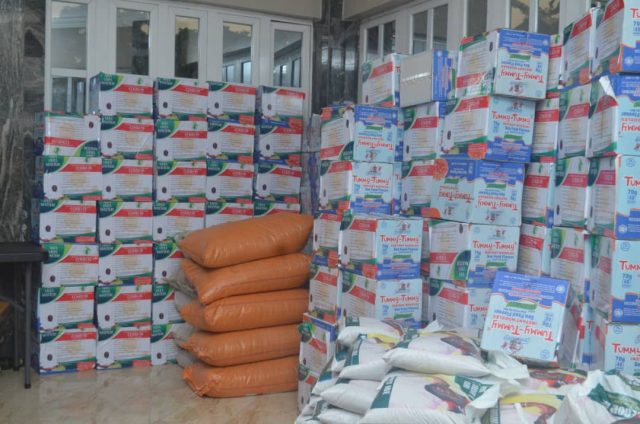 The Prof. Gregory Ibe Foundation (PGIF) has successfully concluded another round of the second phase of palliative distribution to the people of Abia State in this Covid-19 induced hardship.

The one-week distribution was flagged off on Monday, July 13, 2020 at the Gregory University. During the event, the Chancellor and Founder of Gregory University Uturu, Prof Gregory Ibe, who was represented by the Vice Chancellor of the institution, Prof Augustine Uwakwe made opening comments at the event to emphasise how important the intervention is to Prof. Ibe who though far away in the USA still feels the pains and challenges of the people of the state at this trying time.

The chairman of Prof Gregory Ibe Foundation(PGIF), Prince Emeka Okafor, stated that the palliative distribution is targeted at the less privileged members of the society. He therefore charged representatives of the Local Government Councils of the state and other organisations to ensure effective transmission of the palliatives to the needy members of the groups they represent irrespective of their social, religious, tribal or political leanings.

He noted that as a non-partisan organisation, the Foundation was established â€œto cater for the well-being of all members of the society without bias for their political or tribal affiliationsâ€, emphasising that the interventions are usually targeted at improving the lives of the less privileged members of the society.

The Coordinator of the PGIF second phase palliative distribution, Mr. Eze Ibe Aja stated that Prof. Ibe initiated the second phase of the palliative distribution due to the lingering effects of the pandemic, arising from his concern for the well-being of the poor masses in the face of the hardship. He therefore enjoined LGA Ambassadors of Abia Crusaders, Council Ward representatives, leaders and other group representatives to â€œdistribute the items judiciously and equitably, no matter the quantity, ensuring that each needy Abian receives somethingâ€.

Welcoming the delegation to Ugwunagbor Local Government Council, the Transition Committee Chairman, Peter Aguwamba, thanked Prof. Ibe for the kind gesture. He applauded him for having the welfare of the less privileged members of Abia society at heart which led him to undertake a second phase of palliative distribution after executing a resounding first phase.

The Chairman of Ugwunagbor Stakeholders Forum, Hon. Chinwe Nwanganga, also thanked Prof Ibe for remembering her people in particular and the entire citizens of Abia State through his “charity and peculiar act of benevolence”. She reassured the team that the items received will subsequently be delivered to the targeted indigent members of the Local Government Council, who according to her, need it the most..