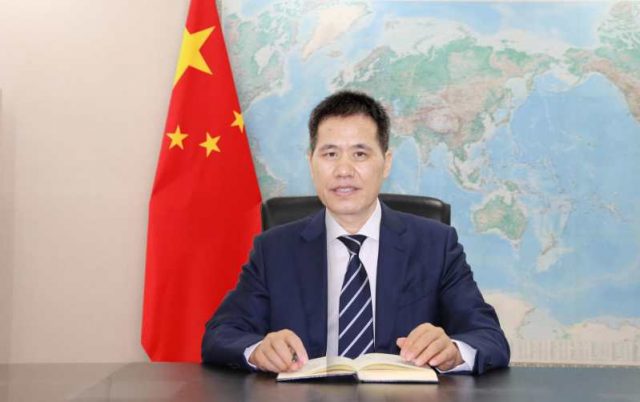 Call of duty brought Dr. Zhou Pingjian to Nigeria to serve as Ambassador Extraordinary and Plenipotentiary of the Embassy of the People’s Republic of China to Nigeria.

His official mission began in the first week of September 2019 after the tenure of Ambassador Gu Xiaojie, his predecessor expired. That was when the diplomatic relationship between Nigeria and China was 45 years old.

As it is for every beginning, his assignment ended on July 8, 2020, and in a manner that stands him out after an assessment as having accomplished much and crafted a deeper and better relationship between the two countries than he met it.

Eventually, the ambassador became more than just an ambassador to Nigeria, but the Ambassador in Nigeria. He set many unprecedented feats in his office and capacity of improving on the existing good relationship between his country and Nigeria.

With his tour of all the 36 states of Nigeria, reaching the common people, widening the benefits of the two sides and establishing personal relationships with the citizens of Nigeria, he took diplomacy at his high height down to the streets and to the ordinary people.

An ambassador, especially that of a powerful country is such a powerful personality who only interacts at the corridors of power at the presidential offices where they discuss policies and lofty ideas that most times donâ€™t trickle down to the common people.

But that was not for Ambassador Zhou who made power look human and came down to interact with the class of citizens that never knew that such high diplomatic assignment could be something common citizens can relate with.

It was common for Zhou to host his Nigerian friends in his home for dinner or mandate his team to host some individuals.

What mattered to him wasn’t just high power, but even low and little relationships that would help further a closer tie between China and Nigeria.

In the Forum on China Africa Cooperation (FOCAC), beyond the discussions in air conditioned posh offices, people-to-people bond in the streets is a major focus. Zhou worked so much on that as he also never left high scale diplomacy out.

At the Chinese traditional festivals, he was always a common face mixing with the Chinese community in Abuja mainly and the ordinary Nigerians. Even the media was always taken along as the embassy under his supervision even donated Covid-19 materials to the Nigerian Union of Journalists (NUJ) in Abuja

During his four years, more than ever before, there were so many trips for media practitioners to China for better and closer interaction and it was in his days that Nigerian students in Chinese universities peaked to over 7,000, a sign of better understanding of China and acceptance of its education system by Nigerians.

His visit to all the states of Nigeria were not jamboree, picnic or mere tourism but for projects, diplomatic discussions and many more to create better impact with the people of Nigeria and know the country more which implies the Chinese government knowing Nigeria more and better with peculiarities.

He still also made top diplomatic achievements and landmarks when not leaving the lower rung unattended.

It was in his days of service in Nigeria that President Muhammadu Buhari in September 2018 attended the FOCAC Beijing Summit 2018, and met with President Xi Jinping and Premier Li Keqiang.

A year after September in 2019, Mr. Yang Jiechi, Special Envoy of President Xi, member of the Political Bureau of the Communist Party of China (CPC) Central Committee and Director of the Office of the Foreign Affairs Commission of the CPC Central Committee, visited Nigeria, met with President Buhari and Nigeria Foreign Minister, Geoffrey Onyeama on the development of the Belt and Road Initiative, implementation of the outcomes of the Beijing Summit of the Forum on China-Africa Cooperation (FOCAC), and enrichment of the China-Nigeria strategic partnership

Earlier in January, 2017, Mr. Wang Yi, Foreign Minister of China, paid official visit to Nigeria, met with Buhari and Onyeama. A Joint Statement by the government of China and the government of Nigeria on the reaffirmation of Nigeria’s One China policy was also signed.

In October 2018, Mr. Chen Xiaodong, Assistant Foreign Minister of China visited Nigeria, met with Vice President Yemi Osinbajo and Onyeama on the implementation of the eight new initiatives raised at the 2018 summit of the Forum on China-Africa Cooperation (FOCAC) held in Beijing.

In September, 2018 China and Nigeria signed a governmental MoU on the Belt and Road Initiative (BRI). On the strength of the BRI also, some projects were undertaken and while some are complete, others are still in progress. They include the Abuja Light Railway, the Abuja-Kaduna Railroad, Lagos-Ibadan Railroad, new airport terminals in Abuja, Lagos, Kano and Port Harcourt, Digital TV project for a thousand Nigerian Village through the StarTimes, the Zungeru Hydropower Project, the Abuja-Keffi-Lafia-Makurdi Road, Lekki Deep Seaport

As earlier stated, Ambassador Zhou during the tenure visited all 36 States in Nigeria. He also didn’t overlook the importance of information dissemination and the need to keep Nigerians abreast of the diplomatic good times between China and Nigeria in his days. His byline and face were regular and very familiar with the media and media consumers in Nigeria with 48 published articles in the local news spanning the online and print media outlets to promote bilateral relations. He also made more than a hundred public speeches and remarks, attended and capped it with more than a thousand local events.

To play his role in the education sector, in his days of service in Nigerian, Nigerian students in China was 7,117 which makes Nigeria the biggest African country of origin for foreign students in China. Among them, 784 are under the Chinese government scholarship scheme.

Hundreds of Nigerian students graduated each year from the China Cultural Centre in Abuja, Confucius Institutes in Nnamdi Azikiwe University, Awka (UNIZIK) and the University of Lagos (UNILAG)

In 2019, the two-way trade between China and Nigeria reached US$19.27 billion, which was a growth of 1,900 times of what it was in 1971 when diplomatic ties between the two countries were established. The trade growth rate was 26.3%, ranking first among China’s top 40 trading partners. China’s import from Nigeria also increased by 43.1%. In 2000, Nigeria’s trade with China accounted for a mere 1% of the total of Nigeria’s foreign trade. In recent years, China has become Nigeria’s top trade partner. Worthy of note is the revelation of Ambassador Zhou in January 2020 in Abuja during the Chinese New Year festival that China-Nigeria trade balance had started narrowing and fairly in favour of Nigeria and most of all shifting away from only raw material export to China with more finished goods content.

April this year marked the 20th anniversary of the establishment of the Forum on China-Africa Cooperation (FOCAC). Zhou remarked that â€œThe FOCAC has now become an important platform for collective dialogue and an effective mechanism for practical cooperation between China and Africa, maintaining a leading position in international cooperation with Africa. The 2018 FOCAC Beijing Summit was a great success, leaders of China and Africa side unanimously decided to build a closer China-Africa community with a shared future, defining the general direction of joint efforts.

â€œBoth China and Nigeria are major developing countries of great influence in the world. As the largest developing country in the world, China highly values its strategic partnership with Nigeria, the largest developing country in Africa. Since the establishment of diplomatic ties in 1971 and strategic partnership in 2005 in particular, the all-round, wide-ranging and high-quality bilateral cooperation between China and Nigeria has been a pace-setter for China-Africa cooperation. In recent years, thanks to the strategic guidance and personal commitment of President Xi Jinping and President Buhari, China and Nigeria have significantly enhanced political trust and secured fruitful outcomes in practical cooperation. China-Nigeria relations are at their best time in history and face new opportunities of growth.

“At the beginning of a new decade, China stands ready to work with Africa to speed up the implementation of the outcomes of the FOCAC Beijing Summit, promote high quality BRI development, deepen practical cooperation in various fields and jointly build a closer community with a shared future for China and Africa.”

Remarks on multilateral cooperation against COVID-19

After the virtual summit of June 17 between China and the FOCAC countries and hosted by Chinese President Xi, Zhou stated that: “China and Africa have always been communities with a shared future. We are good brothers who have shared weal and woe. Our peoples, having fought shoulder-to-shoulder for national liberation, are partners for common development. A few years back, we were together fighting Ebola. In the face of COVID-19, China and Africa have offered mutual support, fought shoulder to shoulder with each other, and enhanced solidarity and strengthened friendship and mutual trust.

China shall always remember the invaluable support Africa gave us at the height of our battle with the coronavirus. Over 50 African leaders expressed solidarity and support in phone calls, letters or public statements. By sending heartwarming sympathies and good wishes, the government and good people of Nigeria have firmly stood by us ever since the outbreak. As President Buhari noted in his statement of solidarity as early as February 2, “China’s efforts to contain the spread of the coronavirus have been exemplary, as well as the country’s collaboration with international agencies and other countries on the matter, With all the efforts being put in, we know that it is only a matter of time before this nightmare passes.” Many African countries offered us funds or in-kind assistance despite their own limited resources. Moreover, at the most demanding stage of its outbreak response in China, many African brothers and sisters chose to stay put in Wuhan or other parts of China and did a good part in the battle against the outbreak with great understanding, solidarity and cooperation. In return, when Africa was struck by the virus, China was the first to rush in with assistance and has since stood firm with the African people. China has a long tradition of offering medical assistance to Africa.

In the battle against COVID-19, a total of 148 Chinese medical workers have been sent to 11 African countries including Ethiopia, Burkina Faso, Djibouti, Cote dâ€™Ivoire, Zimbabwe, DR Congo, Algeria, the Republic of the Congo, Equatorial Guinea, Sudan, Sao Tome and Principe. Comrades-in-arms indeed, China and Africa.

The COVID-19 is still affecting many parts of the world. Both China and Africa face the formidable task of combating the virus while stabilizing the economy and protecting people’s livelihoods. As President Xi stressed at the Summit, we must always put our people and their lives front and center. We must mobilize necessary resources, stick together in collaboration, and do whatever it takes to protect people’s lives and health and minimize the fallout of COVID-19.”

In February when the Covid-19 was taking a serious toll on China, Ambassador Zhou attended some number of awareness meetings with Nigerian groups including the media and later parents of Nigerian students in China that was hosted by the Nigerian Foreign Ministry where he enlightened the parents on the measures in his country to safeguard everybody living in China, including their wards. The parents that attended the meeting expressed their satisfaction over his assurance and left with more peace of mind.

In those days when the pandemic started crawling into Nigeria and spreading, he was the one that received 15 Chinese medical experts that arrived the country to assist the nation fight back the pandemic. The embassy under his supervision also made a lot of donations of medical equipment to Nigeria to fight the pandemic.