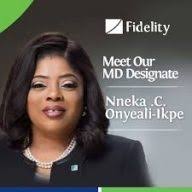 Fidelity Bank Plc has announced the appointment of Mrs Nneka Onyeali-Ikpe as its new Chief Executive Officer Designate. Her appointment follows the impending exit of Mr Nnamdi J. Okonkwo, who is scheduled to retire from the bank’s board of directors come December 31st, 2020.
Details of the appointment
A notice that was sent to the Nigerian Stock Exchange this afternoon stated that Nneka Onyeali-Ikpe’s appointment will take effect on January 1st, 2021. She is currently an Executive Director at Fidelity Bank, overseeing the tier-2 bank’s Lagos and South West Directorate.

Note that Onyeali-Ikpe’s appointment is still subject to the approval of the Central Bank of Nigeria. Part of the notice by the bank said:

“This is to notify the Nigerian Stock Exchange and the general public of the impending retirement of Mr. Nnamdi J. Okonkwo, the Managing Director/Chief Executive Officer (MD/CEO) of Fidelity Bank Plc, from the Board of Directors of the Bank, with effect from December 31, 2020, upon completion of his contract tenure.

“In compliance with the succession policy of the Bank, the Board has approved the appointment of Mrs. Nneka Onyeali-Ikpe, the current Executive Director, Lagos and South West Directorate as the MD/CEO Designate of the Bank, to assume office with effect from January 1, 2021. The approval of the Central Bank of Nigeria has been obtained for the appointment.”

Note that the company also announced the appointment of Mr Kevin Ugwuoke as an Executive Director in charge of risk management. His appointment is also subject to the approval of the Central Bank of Nigeria.
About the newly-appointed CEO Designate
Mrs Nneka Onyeali-Ikpe has over 30 years of banking experience, including stints at Standard Chartered Bank Plc, Zenith Bank Plc, and Enterprise Bank Plc. She joined Fidelity Bank Plc’s board of directors in 2015 and has reportedly played a very integral role in the transformation of the bank’s Lagos and Southwest Directorate.

She is a graduate of Law from the University of Nigeria, Nsukka, and also holds a Master of Laws (LLM) from Kings College in London. Other professional certifications were obtained from Harvard Business School, Wharton School, University of Pennsylvania, INSEAD School of Business, London Business School, and more.