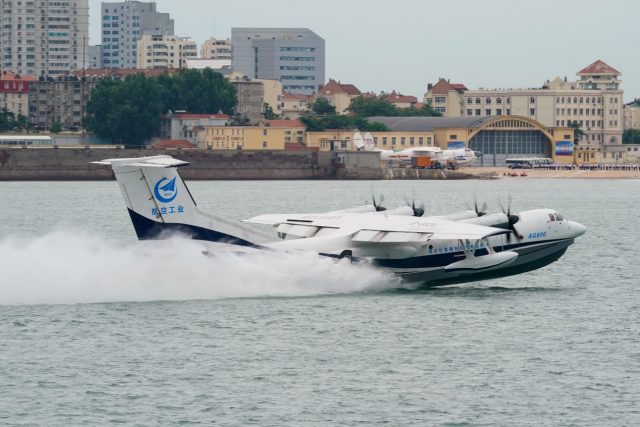 “It was the first time for China to develop such a large amphibious aircraft, and a similar aircraft of this size is also rare in the world,” said Zhao Jingbo, deputy commander of the AG600 project.

The amphibious features of the AG600 was perfectly illustrated through its maiden flights on bases of land, lake and sea. It is the first of its kind in China.

The flexible “big guy” flies fast and far, and is capable of carrying heavy loads. Besides, it also boasts broad observation and is able to elevate from and land on both water and land. It is a jack of all trades in aerial firefighting and water rescue.

“The aircraft carries as much as 12 tons of water in each forest firefighting mission, and drops water over an area of 4,000 square meters, which is equivalent to a mini football pitch,” Zhao introduced.

Compared with helicopters, vessels and other devices, the AG600 is faster and has a longer range regarding sea rescue. It can rescue up to 50 people on each mission or be loaded with air-drop materials of similar weight.

Speaking of the maiden sea-based flight of the AG600 which had succeeded in taking off from water, Liu Ying, deputy chief designer of the aircraft and head of the test flight base of China Aviation Industry General Aircraft Co., Ltd. in Zhuhai, Guangdong Province, explained that the density of sea water is 2.5 percent larger than that of fresh water, which results in a larger counter-acting force from the sea water when the aircraft lands on sea surface. “Such difference makes pilots feel that the sea surface is a little bit ‘harder’ than fresh water surface,” Liu added.

Besides, taking off from fresh water and sea water presents different visions and operation requirements. On one hand, the sea surface is broader than a lake, which poses a trickier challenge for pilots in the selection of the landing point; on the other hand, in sea-based flights, pilots need to take into consideration of wind direction, wind velocity, currents and waves, as well as the comprehensive influence from high temperature, high humidity and high salinity.

“In order to better control the dynamics of the aircraft, pilots must have a rapid and precise control, which calls for meticulous and accurate handling, so that the aircraft can stay stable during taking off and landing,” Liu told the People’s Daily, adding that the sea-based maiden flight had a stricter requirement for pilots.

Starting in 2009, the AG600 amphibious aircraft finished maiden land-based, water- based and sea-based flights in 2017, 2018 and 2020 respectively. Now it has entered a new phase of development.

The three successful maiden flights were hard-won results. Due to the COVID-19 epidemic, many tests of AG600’s maiden flights were postponed. Facing the challenge, the research teams of the aircraft simulated test flight scenarios and chartered buses to ensure they can show up at test sites. As of May this year, an AG600 prototype has made 172 preparatory flights that lasted 308 hours.

After the maiden sea-based flight, the AG600 will go through research flights from sea water to further test its performances in wave resistance, handling, structure and systems. “Following-up projects will go into full swing,” said Chen Yuanxian, Executive Vice President of the Aviation Industry Corporation of China. The development team will focus on the firefighting-type of AG600 aircraft, which is expected to be completed by 2023, he added.