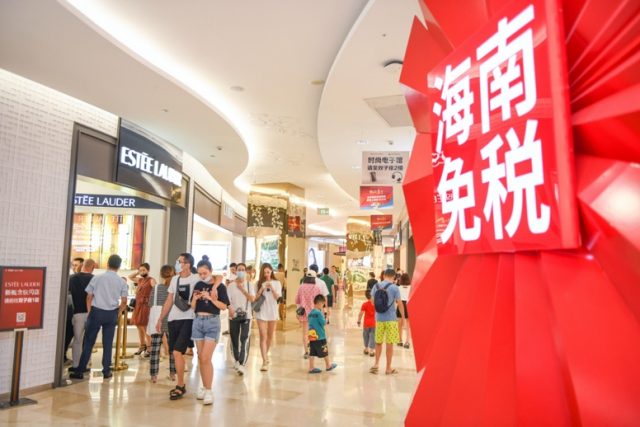 China‘s island province Hainan attained 2.22 billion yuan ($317.45 million) from duty-free shopping between July 21 to 27, up 234.19 percent from the same period last year, said China’s General Administration of Customs on July 30, about a month after the province made its sixth adjustment to its duty-free policy.

During the period, 281,000 tourists bought duty-free products on the island, 42.71 percent more than those from a year ago.

The unprecedented policy adjustment ignited a wave of offshore duty-free shopping in the province. The tax-free shopping quota for travelers has been raised to 100,000 yuan per person each year, and the 8,000-yuan duty-free cap for a single item is also cancelled. Besides, the number of categories with a single-purchase quantity limit is significantly reduced.

As Hainan is transforming itself into a high-level free trade port, the offshore duty-free policy is releasing new vitality, taking the province a step closer to its goal of becoming an international tourism and consumption center.

“The policy adjustment significantly drove the sales of luxury watches, jewelries, mobile phones and liquors,” said Xie Zhiyong, general manager of Hainan Duty-free Co., who attributed the sales rise to the competitive prices. Since the outbreak of the COVID-19 epidemic, the company has offered huge discounts and attracted overseas consumption back home.

Xie’s point echoed with the statistics recently released by Hainan Provincial Bureau of Statistics which suggested an evident pickup in the province’s consumption market in the second quarter this year. In the first six months of 2020, Hainan recorded 8.57 billion yuan in duty-free shopping by tourists, up 30.7 percent from a year ago. Nearly 2.3 billion yuan was achieved in June, representing a year-on-year growth of 235 percent.

Though significant adjustment has been made to the duty-free policy, many tourists still complained about the inadequate categories and brands of offshore duty-free products.

“The per capita consumption stood at around 7,800 yuan 27 days after the policy adjustment, which is far less than the per capita annual tax-free shopping quota of 100,000 yuan,” said Liu Feng, director of the Research Center for Free Trade Port with Chinese Characteristics of Hainan Normal University. Liu said more entities need to be encouraged to compete in the business, expand their purchasing and sales channels, and increase the number of brands and categories.

Relevant departments of Hainan issued a joint declaration on July 10, annoucing that they were selecting new business entities for offshore duty-free shopping through market-oriented competition, such as bid invitation. It would help build an encouraging and competitive environment to promote the backflow of overseas consumption. Service, brands and categories are key areas where duty-free shops shall make efforts, Xie said.

China’s duty-free shopping is a vast “blue sea” waiting to be explored, said Xia Feng, a researcher with the School of Politics & Public Administration of Hainan University. COVID-19 lowered people’s enthusiasm for overseas traveling, but not that for shopping.

With the duty-free policy, as well as the fiscal and financial policies to build Hainan into a free trade port, the province is walking steadily on its path to become an international tourism and consumption center.