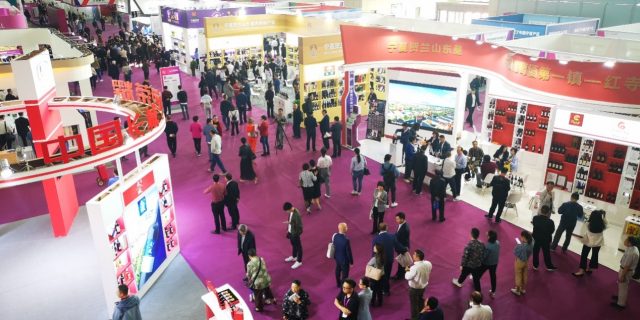 The eastern foot of Helan Mountain, on the outskirts of Yinchuan, capital of northwest China’s Ningxia Hui Autonomous Region, is a contiguous area of wine production, which is hailed as a “purple business card” of the Hui autonomous region.

From the first grape seedling planted some 20 years ago, to building a complete industrial chain and influence, the grape wine industry is thriving on this once barren land.

Since 1996, China made the collaboration on poverty alleviation between the eastern and western regions a major national strategy. Xi Jinping, who then served as the deputy secretary of the Communist Party of China (CPC) Fujian Provincial Committee, was in charge of Fujian’s effort to assist Ningxia. Fujian-Ningxia collaboration officially set off since then.

Ningxia’s Xihaigu region was once listed as the “most unfit place for human settlement” by the United Nations for its barren land and lack of water resource. Fortunately, a resettlement township was founded on the sands of a Gobi desert south to Yinchuan, capital of Ningxia in 1997, absorbing over 40,000 residents from Xihaigu. To commemorate the close bond of collaboration between Fujian (also known as Min for short) and Ningxia (also known as Ning for short), the township was named Minning.

Poverty alleviation was carried out simultaneously as Minning started construction and resettlement work, and the grape wine industry was an important pillar for the town to shake off poverty. Entrepreneurs from Fujian believe that the Gobi desert where Minning locates is not an average one. Situated 38.5 degrees north of the Earth’s equatorial plane, Minning sees low precipitation, long sunshine hours, and high diurnal temperature variation. Besides, the rich minerals in its high-permeable sandy soil offer great growth conditions for wine grapes.

With capital and technical input, the Gobi desert of Minning was soon covered by green leaves and filled with the aroma of wine. Thanks to the grape wine industry, the relocated residents from Xihaigu have had stable jobs and increasing income. As a result, they stayed in Minning.

Yang Cheng resettled in Minning after living in the mountains for decades, where he planted potatoes and wheat and worried all day for irrigation. Since he moved to the new town, his family all started working in a vineyard. Yang became an electrician after training, and his wife a sanitation worker. Plus, his son drives excavators for the vineyard. The family of three earns over 10,000 yuan ($1,435) per month.

The vineyard where Yang’s family work is operated by Fujian businessman Chen Qide. Starting on a 6667-hectare wasteland, Chen vows to make the best wine in Ningxia. Now, the wine he makes wins international awards almost every year.

As of the end of 2019, the eastern foot of Helan Mountain had a total of 38,000 hectares of vineyards, offering around 120,000 jobs for relocated residents.

Lai Youwei is a cadre from Dehua, Fujian designated to serve temporary position in Minning. After arriving in Ningxia, he has invited many business people from his hometown to the vineyards in Minning, recommending products to them to expand the sales channel. He also joined a livestream marketing show this May to help sell the wine during which he finished orders of nearly 300,000 yuan.

Zhu Wenzhang, from Jinjiang, Fujian, is a wine dealer now working in the eastern foot of Helan Mountain. He introduced an innovative method of “shared winery” based on his connection with wine dealers who prefer high-quality grape wines. The method helped more than 50 enterprises “claim” a total of 200 hectares of vineyards as the origin of their production, so that the quality is better controlled. Besides, grape growers don’t have to worry about the sales.