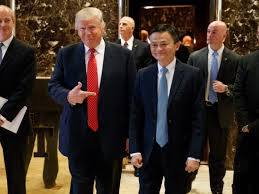 Following a series of crackdowns on Chinese technology firms, US President Donald Trump on Saturday indicated that he might target one of the largest e-commerce companies in the world – China-based Alibaba Group. Chinese analysts say it’s another move motivated by US domestic politics that will deal a short-term blow to Chinese companies but have limited impact in the long run.
The Hangzhou, East China’s Zhejiang-based company generates the vast majority of its revenue from the burgeoning domestic e-commerce sector, while its presence in the US is relatively small, experts noted.
Motivated by election politics, Trump will likely aim to restrict Alibaba’s development in the cloud computing and chip fields, the experts warned.
Asked whether he was considering exerting pressure on more Chinese companies such as Alibaba at a news conferences on Saturday (US time), Trump said that “we’re looking at other things, yes.”
It was unclear whether the US president, known for making erratic statements, was speaking of concrete plans to assault Alibaba or was responding to a seemingly leading question from a Bloomberg reporter.
Still, Chinese experts said that as Trump has put his bid to win re-election above everything else, a crackdown on Alibaba is possible. In line with the US’ long-term strategy to contain China’s technological rise, Trump might take action in two areas where Alibaba is moving rapidly ahead – cloud computing and chips, experts said.
“For Trump, nothing matters more than [his reelection], therefore, he will do whatever he feels will be conducive to his campaign… so I think it is possible [he will target Alibaba],” Liu Gang, director of the Nankai Institute of Economics and chief economist at the Chinese Institute of New Generation Artificial Intelligence Development Strategies, told the Global Times on Sunday.
As for specific measures the US might take against Alibaba, Liu Gang said that Trump might target the company’s cloud services and chip research and development by imposing restrictions on normal exchanges and cooperation between the company and its US counterparts.

“The US won’t be able to touch [Alibaba’s] main business operation… its biggest card is to slow the pace of China’s innovation in chips,” Liu Gang said, adding that while a certain impact will be felt in these areas, “taking political action to stop innovation will not work.”
Though Alibaba has been seeking to expand its presence in the US through its online shopping platforms and its cloud services, its main revenue comes from the Chinese market. In fiscal 2020, its China e-commerce business, including online retail, is expected to account for 65 percent of Alibaba’s total revenue, according to Forbes.
International e-commerce revenue, including that from the US, is estimated to only account for 8 percent of the total.
While Alibaba has been investing heavily in cloud services business and has taken a relatively big share in the US market, total revenue from its cloud business is expected to only account for around 8 percent of its total revenue, according to Forbes.
“Because this is political in nature, there will be some impact, but the impact won’t be too big as Alibaba has very limited operations in the US,” Fang Xingdong, founder of Beijing-based technology think tank ChinaLabs, told the Global Times on Sunday.
Fang said that the US might move to restrict US tech companies from conducting transactions with Alibaba, like the measures announced against TikTok and other Tencent’s WeChat, and certain research and development (R&D) personnel from working for Alibaba.
In addition to cloud computing technology, Alibaba has also been investing heavily in chip R&D through its DAMO Academy, which experts said is making significant breakthroughs.
Any potential crackdown on Alibaba could also hurt US interests more than the company itself, as many US companies are seeking to sell their products and services on Alibaba’s online shopping platforms and many US investors hold the company’s stocks on the New York Stock Exchange.
Despite rising tensions, US brands such as Apple and Nike performed well during the Singles’ Day shopping festival on Alibaba’s Tmall.
Apple sales on the platform in 10 minutes exceeded seven times the full-day sales during the 2018 Singles’ Day, while Nike’s sales reached 100 million yuan ($14.39 million) within an hour, according to media reports.
In light of the COVID-19 pandemic, Alibaba announced in June that it would provide new financing and freight-shipping services for small and medium-sized businesses in the US and launch virtual “trade shows” for manufacturers and wholesalers based in the US to help them sell their products on its platform. The Alibaba.com US Online Trade Shows are scheduled for Tuesday through Thursday.
“Our study shows that both Alibaba and [another Chinese e-commerce firm JD.com Inc] offered many services to foreign companies and helped them… including helping their sales in China, so cracking down on such companies is not conducive to the US interests and will hurt the US more,” Liu Gang said.
Trade tensions between China and the US have undermined a plan announced during a meeting between Alibaba founder Jack Ma Yun and then US President-elect Donald Trump in January 2017 to help create 1 million US jobs.
In an interview with the Xinhua News Agency in June 2018, Ma said that the precondition for plan was a friendly, cooperative China-US relationship, but that was undermined and “there was no way to complete the pledge.”
Apart from US businesses’ sales on Alibaba, any potential move by the US could also hurt US investors who hold Alibaba stocks. As of Friday, Alibaba’s biggest institutional shareholder was US-based Blackrock and other top shareholders include many US companies such as Vanguard Group, Price (T.Rowe) Associates and JP Morgan Chase, according to Yahoo Finance.
Still, Trump, who appears to be desperate to win reelection amid a much-criticized response to the COVID-19 pandemic and a severe economic crisis, could still move ahead with crackdowns on more Chinese firms such as Alibaba and Tencent, analysts said.
“Containing China’s rise is a long-term strategy of the US… so many leading Chinese tech companies are definitely within the target range of the US,” Liu Dingding, an independent analyst of internet companies, told the Global Times on Sunday.
But Liu Dingding added that the damage the US could exert on these companies will be minor, given their limited presence in the US and their advanced status in their fields. “There is no need to pay special attention [to the US crackdown],” he said.