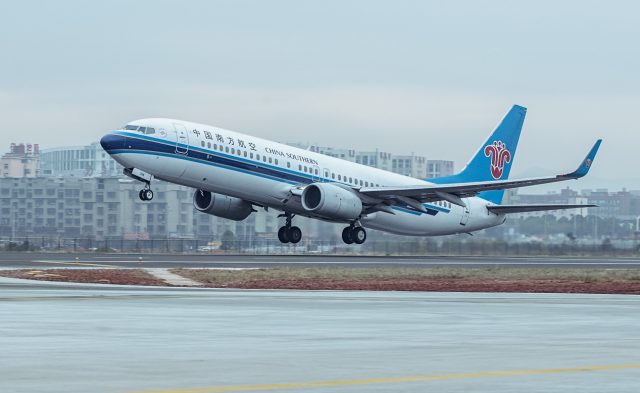 An all-cargo flight operated by Sky Lease Cargo carrying 110 tons of commodities took off from Wuhan Tianhe International Airport for Dallas Sunday, marking the official opening of the Wuhan-Dallas-Los Angeles cargo route.
This is the third regular intercontinental cargo route for the Wuhan airport in Central China’s Hubei Province, and it’s the only domestic all-cargo route to Dallas. Experts said that the opening of the route was driven by the need for bilateral trade and cooperation, and they predict it will play a positive role in the resumption of business for both sides.
The service, using a Boeing 747 all-cargo aircraft, is scheduled to run three times per week, helping the Wuhan airport further improve its port functions, become more attractive to the global electronics industry, and help turn the city into an aviation logistics hub, according to a report that Wuhan Tianhe International Airport sent to the Global Times Monday.
Exports on this route will be mainly electronic products, machinery components and spare parts, and cross-border e-commerce goods, the report said.
The launch of the new route is in line with the Chinese government’s three-year action plan to launch 10 projects to strengthen Hubei Province economically after the successful containment of the COVID-19 epidemic. The action plan was issued on August 11, and it is scheduled to take three years to complete.
As outlined in the plan, Hubei will focus on development in a number of areas including transportation, energy, new infrastructure, cold chain logistics and the upgrading of industrial parks.
Some 4,572 corresponding projects have been listed, with an estimated total investment of about 2.3 trillion yuan ($331 billion).
Among them, connecting Wuhan with the outside world is one of the more important strategies, because it ties in with efforts to accelerate the development and opening-up of Hubei Province, and it will also play a positive role in China-US trade.
“America’s economy is now shifting to the Southwest, where the aerospace and manufacturing needs of Texas are well served by the manufacturing abilities of Wuhan,” Tian Yun, vice director of the Beijing Economic Operation Association, told the Global Times Monday.
The opening of the route also comes after the US shut down China’s consulate in Houston, bringing bilateral relations to a low point.
However, Tian said that the opening of the route will undoubtedly have a positive impact on China-US trade and economic relations.
As of the end of July, Wuhan Tianhe Airport had served 30 international freight traffic hubs. All cargo routes from Wuhan to Liege, Belgium and Chicago have been restored, as well as regular cargo flying transformed from passenger flying to the Hong Kong Special Administrative Region, South Korea, the Philippines and Singapore, according to a government report.
The US carrier started cargo flights much earlier, driven by demand. American Airlines currently operates two daily all-cargo flights from Hong Kong to Los Angeles and two daily all-cargo flights from Shanghai to Los Angeles.
Starting on May 14, AA will add three weekly cargo flights from Beijing to Dallas-Fort Worth using a Boeing 787-9.