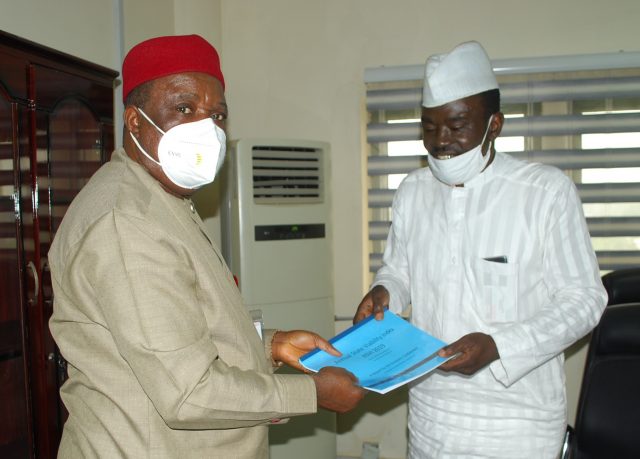 Against the over-dependence in the monthly Federation Account Allocation, the Revenue Mobilisation Allocation and Fiscal Commission (RMAFC) has called for concerted efforts by state governments in boosting their internally generated revenues (IGR).

The Chairman of the Commission, Engr Elias Mbam made the call while receiving an Annual States Viability Index (ASVI) from the Editor-in-Chief of the Economic Confidential, Mr. Yushau A. Shuaib in his office on Friday.

The RMAFC boss said the Federation Account Allocation is overstressed by the over-dependence of the tiers of government and hence the need for state governments to develop strategies to boost their internal revenues.

“I have come to realize that Economic Confidential has become a household name and its reports that are factual and authoritative should be useful, especially in guiding states whose revenues keep dwindling so that they can improve.”

Speaking on the report, the Editor-in-Chief of the Economic Confidential, Mr. Yushau Shuaib said the ASVI report assessed and ranked States by their annual IGR in comparison with their receipts from the Federation Account Allocation.

Mr. Shuaib nevertheless stated that apart from Lagos and Ogun States that ranked high in the revenue generation in 2019, more states have impressive and encouraging IGR in 2019 compared to 2018.

The report shows that only Rivers, Kaduna, Enugu, Kwara and Zamfara States had most impressive Revenue generation in 2019 compared to their IGR in the previous year 2018 for improving by more than 10%.

Also, in his remarks, the RMAFC secretary Mr. Mohammed Shehu encouraged the management of the Economic Confidential to produce and circulate more of such reports on economic indices that could help governments at levels to improve in their fiscal efficiency. He said the Commission would look at the report further for recommendation to Federation Account Allocation Committee.

The Annual State Viability Index is produced by the Economic Confidential, a publication of Image Merchants Promotion Limited.