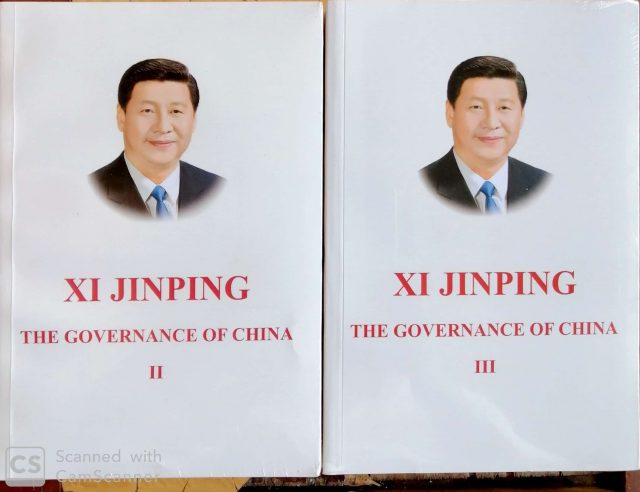 The third volume of “Xi Jinping: The Governance of China” has been published by the Foreign Languages Press in both Chinese and English and will be available at home and abroad.
The newly-published volume collects 92 articles, including speeches, conversations, instructions and letters of Xi, general secretary of the Communist Party of China (CPC) Central Committee, between Oct. 18, 2017 and Jan. 13, 2020, said a statement Tuesday.
The articles are divided into 19 topics and the volume also contains 41 photos of the Chinese leader during the same period.
The newly-published volume was jointly compiled by the State Council Information Office, the Institute of Party History and Literature of the CPC Central Committee, and the China Foreign Languages Publishing Administration.
The first and second volumes of the book have been well received at home and abroad since they were first published in 2014 and 2017, respectively.
In the practices of leading and promoting governance in the new era since the 19th CPC National Congress, Xi has made a series of important expositions and put forward many major concepts and ideas, further enriching and developing the Party’s theoretical innovations, the statement said.
The third volume records the practices of the CPC Central Committee with Comrade Xi Jinping at the core in uniting and leading the whole Party and Chinese people of all ethnic groups to make new and major progresses in various undertakings of the Party and country since the 19th CPC National Congress, the statement said.
It is an authoritative work that fully and systematically reflects Xi Jinping Thought on Socialism with Chinese Characteristics for a New Era, it added.
The new volume is expected to help the international community better understand the main contents of the thought, the CPC, Marxism and socialism with Chinese characteristics, it said.