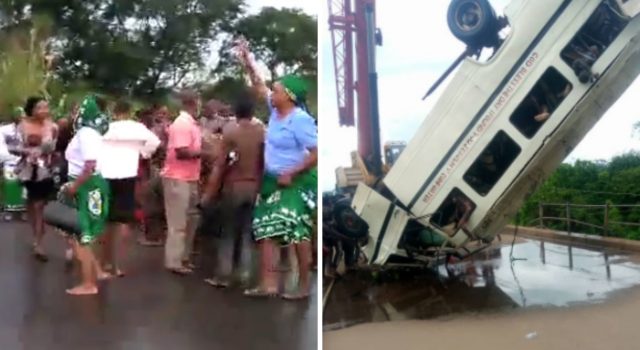 Five people were rescued and others were missing after a passenger bus fell into a river in the Ivo district of Ebonyi state, south Nigeria, a police officer told Xinhua on Saturday.

The accident involved a bus carrying members of a church returning from a burial on Friday evening, said Stella Uchegbu, state commander for the Federal Road Safety Corps, adding that so far the number of people on board cannot be identified as the bus is still trapped.

“That kind of bus normally carries up to 30 or more passengers. We do not know whether it was fully-laden,” Uchegbu said.

Current reports show that the rescued victims remain unconscious and have been taken to a local hospital, Uchegbu added.

An eye witness told Xinhua on Saturday that the driver lost control of the bus while trying to overtake a truck. The vehicle then veered off into the river and got submerged immediately.

A police spokesperson of the state, Loveth Odah, also confirmed the accident on Saturday, describing it as a very unfortunate incident.

She told Xinhua that rescue efforts are still ongoing.