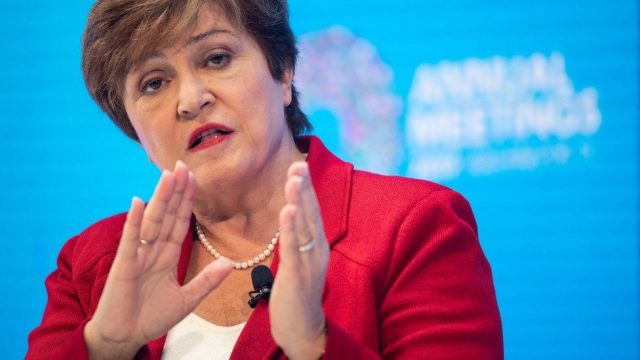 IMF Managing Director Kristalina Georgieva said that nine months into the pandemic, the world is still struggling with the darkness of a crisis that has taken more than a million lives, and driven the economy into reverse, causing sharply higher unemployment, rising poverty, and the risk of “a lost generation” in low-income countries.

“More than ever, we need strong international cooperation – especially on vaccine development and distribution. Faster progress on medical solutions could speed up the recovery; it could add almost USD nine trillion to global income by 2025. Which, in turn, could help narrow the income gap between poorer and richer nations,” Georgieva told reporters at a news conference.

Releasing Global Policy Agenda at the start of the annual meetings of the International Monetary Fund (IMF) and the World Bank, Georgieva said three measures are needed to overcome the crisis and build a brighter future.

“First – continue with essential measures to protect lives and livelihoods. A durable economic recovery is only possible if we beat the pandemic everywhere. Stepping up vital health measures is imperative. As is fiscal and monetary support to households and firms,” she said.

These lifelines – such as credit guarantees and wage subsidies – are likely to remain critical for some time, to ensure economic and financial stability. “Pull the plug too early, and you risk serious, self-inflicted harm,” she warned.

“Second – build a more resilient and inclusive economy. Our new research shows that public investment – especially in green projects and digital infrastructure – can be a game-changer. It has the potential to create millions of new jobs while boosting productivity and incomes,” Georgieva said.

Supporting workers as they transition to new jobs is another key feature of a more resilient and inclusive future. This is particularly important for women and young people, who have been disproportionately affected by the crisis, she said.

“Third – deal with debt,” she said, adding that global public debt is projected to reach a record high of 100 per cent of GDP in 2021. “This is partly because countries need to boost spending to fight the crisis and secure the recovery. Addressing this issue over the medium-term will be critical. But for many low-income countries, urgent action is required now,” she said.

Given their heavy debt burdens, they are now struggling to maintain vital policy support. They need access to more grants, concessional credit, and debt relief, the IMF chief said.

“The picture over the last few months has become less dire, yet we continue to project the worst global recession since the Great Depression. Growth is expected to fall to -4.4 per cent this year,” she said, adding that over the next five years, the crisis could cost an estimated USD 28 trillion in output losses.

“At the same time, we can see stars shining above us. We see unprecedented efforts in vaccine development and treatment. We see extraordinary and coordinated fiscal and monetary measures putting a floor under the world economy. And the world is starting to learn how to live with the virus,” she said.

“While there is tremendous uncertainty around our forecast, we project a partial and uneven recovery in 2021, with growth expected at 5.2 per cent,” Georgieva said.

All countries, she warned, now face a “Long Ascent”—a journey that will be difficult, uneven, uncertain, and prone to setbacks.