It is apparent that COVID-19 is a global problem that deserves coordinated response at a global level to effectively contain.

This is why the consistent call for action by the World Health Organisation (WHO) is imperative and instructive. The primary instrument put in place by the WHO towards achieving a speedy globally acceptable vaccine for Covid-19 is the Global ACT Accelerator Initiative.

It is designed to accelerate equitable access to COVID-19 vaccine by all nations and citizens of the world irrespective of race, colour or creed.

The ACT Accelerator is a ground-breaking global collaboration to accelerate the development, production, and equitable access to COVID-19 tests, treatments and vaccine. Although the initiative sounds noble, there are however challenges.

Left on their own, African nations would not be able to compete with Western nations in research, manufacturing, distribution of a Covid-19 vaccine, that is why the ACT initiative is of particular importance to African countries.

This is not the time to put the profit motive at the forefront or to embark on a race whose primary motive is profit. It is shared humanity, the world must act to save humanity, this should be the driving force and principal objective.

The novel coronavirus presents an opportunity for global solidarity and the ideals of shared humanity. The virus doesn’t discriminate whether you are African or American, it doesn’t care if you are Caucasian, Asian, Hispanic or Black it doesn’t matter to the virus if you are rich or poor, and it can strike irrespective of who you are or where you are. It is expected that the world comes together, put all differences aside to fight what obviously is a common enemy through the ACT-Accelerator initiative.

This is not the time for experimenting with human lives, countries across the world must show solidarity with one another through information sharing, and humbly seeking advice and guidance where necessary.

There is no doubt that what is needed at this particular point in time is global cooperation and solidary. Hence the pain and anguish many feel when some politicians play politics with human lives.

On July 8,  United States President Donald Trump unilaterally pulled the United States out of the global health body, WHO, after he had earlier pulled funding from the organization in April on grounds that the WHO withheld information about the virus.

The WHO CEO at a press conference on July 9 described Trump’s action as a tragedy.

“This is a tragedy that is forcing us to miss many of our friends, losing many lives. And we cannot defeat this pandemic as a divided world. The Covid-19 pandemic is a test of global solidarity and global leadership”, he had said.

The US is the global health agency’s largest single contributor, therefore, withdrawal of funding means the WHO would lose as much as 15% of its total budget. It has been estimated that as of March 2020, the U.S. owed the WHO about $198 million in assessed fees.

There is no doubt that the de-funding will impact the fight against the coronavirus and could worsen the pandemic, especially in developing countries that rely on the WHO funding. Moreover, with the U.S missing in the global effort to develop a vaccine through the ACT Accelerator project, it has abandoned its traditional global leadership position when it mattered most.

It is unfortunate that the current US president is prevaricating, and playing the blame game. Trump believes America is an island unto itself and as such can survive in isolation. He preaches the greatness of America without considering that America’s greatness is tied to the rest of the global community.

As at the middle of October, the total number of deaths from Covid-19 in the United States had already crossed 220,000 and counting. Yet Mr Trump continues to behave like a bull in a China shop, lashing out at everyone, isolating his traditional allies and going it all alone.

The World had thought that having contracted the virus himself he would learn that the virus is real and a respecter of nobody. Sadly this has not been the case. He continues to downplay the severity of COVID-19, exposing innocent lives to danger and death. It is ironic that while he had access to the best treatment money can buy other Americans do not have the same privilege.

In recent days the spread of the virus has spiked in America and a second wave is expected as the country enters the flu season, but Trump is more concerned with his re-election bid.

America’s failure at containing Covid-19 has been a shock to many. The country currently accounts for almost a quarter of worldwide reported cases of infection. Thus making the United States a global hotspot of the pandemic.

The question is how has the United States gotten to this sorry state that has led to the death of thousands of Americans?

All indications so far point to a failure of leadership and the politicization of the global coronavirus pandemic by the Trump administration.

From blaming China and the WHO, Trump”s messaging has been one of denial and a hope that somehow the virus would magically go away and disappear.

Trump’s public messaging about the coronavirus has been a disaster since January. At no time did he take the virus seriously or devised a national response strategy. He equally failed to mobilise a global response strategy but rather pursued unilateral and an America-only strategy by negotiating future deals with pharmaceutical companies to guarantee that only America has access to future Covid-19 vaccines.

The recent publication of Bob Woodward’s book “Rage” gives an insight into Trump’s leadership failure that allowed the virus to spiral out of control in the US and its consequential effect on the global efforts to contain the virus.

The Trump and journalist Woodward interview has allowed the public to hear and understand what Trump was saying about the virus behind closed doors.

In the series of interviews which collectively lasted nine hours, Trump indicated he was more aware of the threat than he was conveying publicly. And he admitted to playing down the threat, concealing what he knew about how deadly and contagious the virus was.

He told journalist Bob Woodward as far back as in March that he deliberately downplayed the dangers posed by the virus so as not to cause panic even as he recognized how “deadly” the virus was.

In another clip of the interview as reported by CNN, Trump was quoted to have said., “I wanted to always play it down. I still like playing it down, because I don’t want to create a panic.”

Even when there was scientific evidence that wearing a mask offered protection from contracting and spreading the virus, Trump was in denial. He neither wore a mask nor encouraged his supporters to wear a mask.

Taken together, Trump’s private comments and public pronouncements reveal two distinct narratives. What he knew was the infallible truth backed by science was far from what he told the American people. In fact, Trump was more concerned with his public perception than he was with the lives of people. Even after contracting the virus, he continues to downplay its seriousness while getting the best care backed by science. 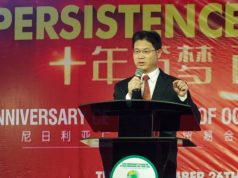