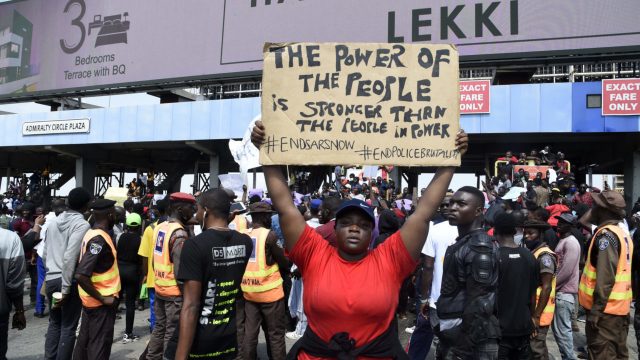 “You are lucky it’s not yet night,” said M. B. Shehu, a dark-skinned mobile police officer.

He was scar-faced and lanky. A one-star Assistant Superintendent of Police, he was probably younger than me but that meant nothing. My companion and I got what he meant because, earlier, the savages he supervised had assaulted us and boasted that they would’ve killed and erased every trace of our existence if they had caught us in the dark.

“I don’t even care,” he said about the possibility of our murder. “I will waste you right here and nothing will happen.” He spoke confidently, as if he had the mastery of “disappearing” citizens, which, in a deadly irony, instigated the #EndSARS protests I had just attended in Abuja.

A few minutes earlier, surrounded by a number of savages Nigeria had granted the permission to bear guns, I wasn’t too sure of seeing the next minute. They hit us with sticks, as though anticipating “self-defence” to justify the use of a more lethal weapon.

Our nightmare had begun on the way to Louis Edet House, the Nigerian Police headquarters. Our #EndSARS procession was intercepted by projectiles of teargas canisters and truck-mounted water cannons, with battle-ready brutes marching to confront us. They looked like villainous extras in a Rambo movie. Even the protesters who rushed to lie flat in resistance had had to move when they realised the trucks had the same sense of humanity as their owners. Not even the journalists covering the protests were spared.

About an hour later, I called a police officer friend at the Complaint Response Unit in Louis Edet and informed him that cars belonging to journalists and some protesters were parked at Ralph Shodeinde Street in the city’s Central Business District, and he offered to speak to the rank-and-file who had blocked all roads leading to Louis Edet.

The officers at the first check-point obeyed the instructions of their superior on the phone and let us through. When we got to our cars, we found them vandalized. My car was dented and three of my tyres slashed. We were then ambushed by the police officers responsible.

The officers were deaf to our explanation that we were authorized by their colleagues a check-point away. I called my friend again and passed the phone to the officers. They collected my phone and smashed it. They struck it repeatedly until it was scattered, with their superior still on the line.

Sani Inuwa, one of my companions, fled in the car that brought us there as the brutes cornered Ibrahim Usman (aka Morocco) and me. “So na una make them ban SARS?” they said. They began to hit us from all angles. I attempted to show an ID card to prove an affiliation to the media, hoping that would stop them. But it only drew their ire. “Na una we dey look for sef,” one said. At that point, I knew I was in trouble. We were in a barricaded area with no civilian witness, and as I blocked the multiple hits with my arms, I lost the endurance to keep up.

Suddenly, they stopped. One of their colleagues was approaching us and had issued an instruction. He wasn’t in a uniform. They agreed to send us to the Louis Edet House for torture, and then hand us over to the Special Anti-Robbery Squad, the same unit that had been announced as disbanded, threatening that we must feel the aggression of that brutal sect before they finally close shop.

When we met ASP Shehu on our way to their torture chamber, he said, “Why didn’t you go to the SARS office to protest?” As Morocco attempted to say it’s because Louis Edet House is the highest authority of the police, they descended on him, slapping, kicking, and hitting again and again.

I had learned long ago that provoking these brutes in an isolated area is Russian roulette. So, throughout the encounter, I refused to be offensive, refused to take their bait, refused to fight back, and even refused to resist arrest. I was lucky that Inuwa, at least, had fled and must have informed our colleagues and other people that we were with the police.

When we got into the Louis Edet premises, there was an instant disapproval of our dehumanizing treatment from a lone voice. He was also a mobile police officer and bore the tag “Ibe King N.” He asked us to be brought to an office instead of the proposed torture chamber. The junior officers had not only broken my phone, they had also broken one of Morocco’s phones and his Apple wristwatch. Luckily, Morocco had hidden a second phone.

The plain-clothed officer, who was probably from the intelligence unit of the police, confiscated Morocco’s WiFi device, saying it’s a recording device. We were searched and made to submit all we had on King’s desk. They made me remove my prescription glasses, which, in their stone-age thinking, was worn for fashion. I complied.

King, a two-star ASP, left the room and spoke to the officers who arrested us. He returned and asked us to sit on the bench. He was the first to allow us to introduce ourselves—to listen to us at all. He was alarmed that we had been profiled and presented as criminals. He gave us our wares.

“I would’ve let you go right now,” he said. “But these guys outside are still going to manhandle you.”

Meanwhile, Aisha Yesufu, Maureen Kabrik, and Florence Ozor, fellow protesters who had been alerted by Sani, called Dr. Oby Ezekwesili, the former Minister of Education and a long-standing soul of Nigeria. She was ill but came to Louis Edet for our sake. Strangely, King’s decision to release us wasn’t a consensus because Auntie Oby was told we were not in police custody and not in the building. She protested and insisted the police must produce her “two sons”. They knew her well enough to know she wasn’t bluffing.

King left the room again to find out the reason for the altercation outside and then returned to ask us to come with him. His colleagues, who had lied that we weren’t in their custody, were visibly disappointed that he brought us out and handed us over to our rescuers.

Our crime, unfortunately, was choosing to abide by the law in demonstrating disappointment in the system that arms this breed of animals and expects civilised engagements with the public. We were powerless. We are powerless because we didn’t pick up arms against the state. These government-sponsored thugs who dehumanized us are strangely incapable of doing the same to the citizens who’ve chosen arms and function as invincible in armed robbery, banditry, kidnapping and terrorism.

The formula applied in our brutalization has radicalized various generations of Nigerians and has contributed to the making of the Boko Haram. But this encounter has also renewed my faith in Nigeria. Our “death warrant” was signed by ASP Shehu, whose full name is Mala Baba Shehu, a fellow Muslim and northerner who, as I have found out, is from Borno State—the same state as Morocco. But the warrant was voided by a Christian and Southerner – ASP Ibe King.

But that is insufficient. Privileges and connections can only go so far in situations like this: Because even if I had the Inspector-General of the Police on the phone with me that day, it would have meant nothing, absolutely nothing to those savages endorsed by the Nigerian state.