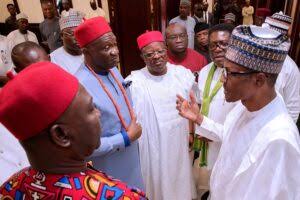 Leaders of the South East geopolitical zone have called on President Muhammadu Buhari to flush out all killer herdsmen that bear arms from all corners of the zone.
They made the call Saturday during a meeting in Enugu between the leaders that cut across political, religious and age divides with a delegation of the president led by the Chief of Staff, Ambassador Ibrahim Gambari.
The meeting was part of the nationwide consultations embarked upon by the federal government to douse tensions after the#EndSARS protests.
The South East leaders team was led by the chairman of the South East Governors Forum, Governor David Umahi of Ebonyi State.

The South East team was made of political, religious, traditional and youth leaders.
The Igbo leaders also thanked President Buhari for what it described as wonderful support for the World Trade Organization Director General position contested fo by Dr. Ngozi Okonjo-iweala.
Details of the demands of the zone tabled before the presidential team are itemized in full below:

After an intensive deliberation and dialogue in a meeting with the presidential delegation led by Prof. Ibrahim A. Gambari, Chief of Staff to Mr. President with the Inspector General of Police, Director General, Department of State Services, Hon. Minister of Information, Federal Ministers from South East with South East Governors and her leaders, today, 7 November, 2020, at Enugu Government House, we the leaders of the South East made up of all the Governors, South East National Assembly members, Federal Ministers of South East, Clergymen and women, Traditional Rulers, Representatives of all the youth organizations in the South East, and student leadership, have resolved as follows:

We thank Mr. President for sending this powerful delegation to visit our people and hear from us.

We thank Mr. President for all the great works he is doing at the second Niger Bridge, the Akanu Ibiam International Airport, dualized road of Enugu to Port Harcourt and some other projects in the South East.

Mr. President, we thank you so much for all your kind commitment in the struggle of our sister, Prof. Okonjo lweala to become the DG of the World Trade Organization.

We are particularly grateful with the way you have engaged the world leaders to see her through the process. May God crown your efforts with success- Amen.

We request a joint operation into all our forests to flush out criminals and killer herdsmen with AK47, while pledging our commitment to continuous co-existence with herdsmen who have been living peacefully with us for years.

We pledge our undivided support and love to our President and his administration.

We, lgbo leaders stand for an indivisible and united Nigeria, built on love, fairness, equity and justice. We believe that under this platform, we are bigger and stronger.

We thank Mr. President for the speed and restraint with which he handled the demand of peaceful ENDSARS protesters, especially his commitment to drive Police Reform and mainstream youth empowerment and also for his courage to deal with hoodlums, criminals and those who hi-jacked the initial protests, to hide under the peaceful protest and kill, maim innocent citizens, security agents and public and private properties.

We sympathize with the families of civilians and security agencies, who lost their lives and properties during the ENDSARS protests (both peaceful and criminal protests).

South East Governors have set up Panels of Enquiry to deal with all infractions of human rights of our people and security agencies, compensation funds for all civilians and security men who lost their lives during the protest.

We have also set up empowerment/employment fund to help more of our youth earn their lawful daily means of livelihood.

We, therefore, with humility, request our President, the father of our nation, to please look into the demands of the various groups of our people, as presented today, review same with a view to solving them.

South East people believe in one Nigeria and this is the reason we are in every part of this country erecting infrastructures, living peacefully with our host communities and doing our businesses.

We pledge to continue to protect all the various ethnic groups living in South East. We enjoin them to go about their businesses peacefully.

We thank Mr. President, Governors and traditional rulers in other parts of Nigeria for their commitment to protect our people, especially during and after the protests. We must continue to live in peace.

We appreciate Mr. President’s delegation for carefully listening to, engaging with stakeholders and undertaking to report faithfully to Mr. President for his consideration and necessary action.

We wish Mr. President’s delegation journey mercies as they travel back, as we pray to God to continue to guard our Presidents health and guide him, as he pilots the affairs of our Nation.