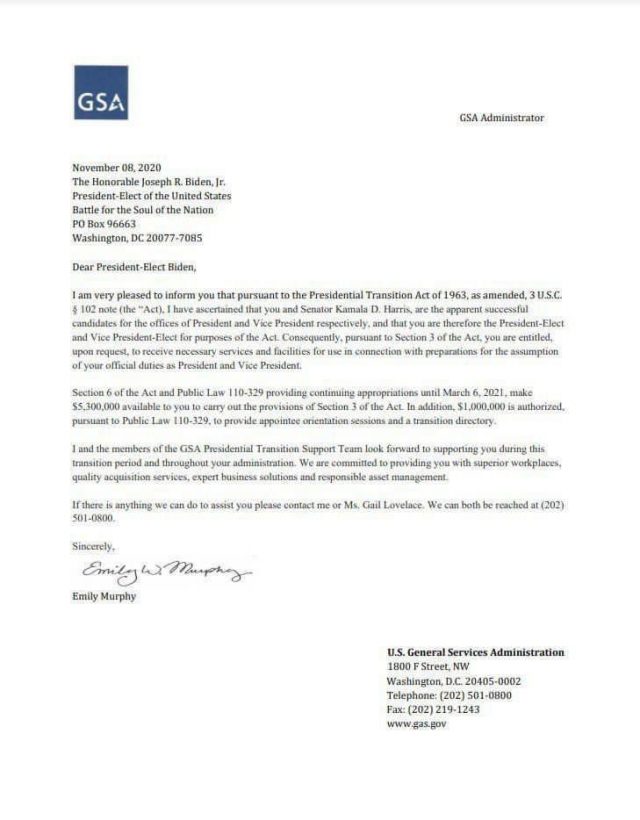 By IKENNA EMEWU
The US General Services Administration (GSA)office that undertakes the arrangements that facilitate transition of power from an incumbent to an in coming president has written Vice President Joseph Biden as president-elect for the commencement of activities leading up to his taking office.
The letter signed by the administrator, Emily Murphy itemised to Biden the procedures and processes to his taking office on January 20, 2021
The letter we exclusively obtained a copy of is in spite of the protestations of President Donald Trump that Biden did not win the election.
Trump has been threatening legal showdown and calling for ballots recount, alleging though without proof that the victory of Biden at the poll was fraudulent and illegal

She said the two would receive necessary services as prescribed by the Act in preparation for their assumption of office as president and vice president.
Also, the letter of November 8, 2020 explained that Biden would be provided a budgetary appropriation of $5.3 million for preparations and other sundry expenses until March 6, 2021 and further $1 million which would be the bill for transition orientation sessions and a transition directory.
She assured him of the full support of the GSA team towards a successful transition, assumption of office and beyond, “providing superior workplace services, expert business solutions and responsibile asset management.”
The import of the letter is the valid endorsement of the system that beyond the stance of President Trump, the system recognises Biden as valid winner of the election.