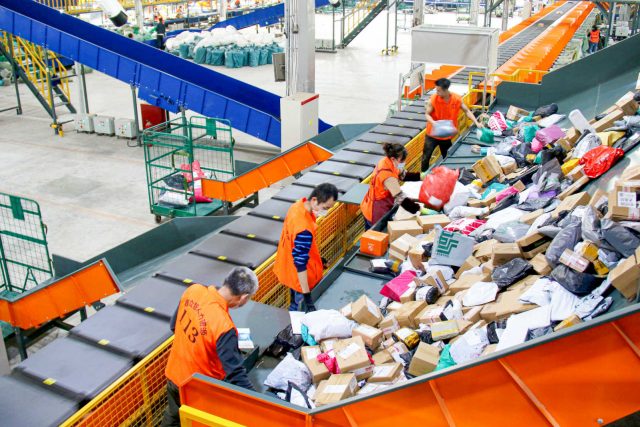 China had handled over 70 billion parcels as of Nov. 16, according to the country’s State Post Bureau. The figure has surpassed the total volume in 2019.

Over the past three months, parcels handled by the express delivery industry saw an average monthly growth of about 10 billion.

The gigantic number came from the vibrant online consumption, as well as China’s super large market that features huge potential.

Statistics indicated that “Double 11,” the largest online shopping spree of China that falls on Nov. 11 each year, was joined by nearly 5 million merchants, 250,000 brands and hundreds of millions of consumers this year.

The rapid growth of the express delivery industry is a result of the vigorous development of e-commerce, said Yang Daqing, deputy head with the research office of the China Federation of Logistics and Purchasing. During the “Double 11,” promotions launched on e-commerce platforms significantly boosted the business volume of the express delivery industry, Yang explained.

A total of over 3.96 billion parcels were handled during this year’s “Double 11”, which was extended from a 24-hour event to a 11-day carnival that started from Nov. 1, according to statistics. Express delivery firms processed 675 million parcels on Nov. 11 alone, up 26.2 percent from a year ago and hitting a record high.

China’s efficient logistics system, as well as its express network that is currently going through accelerated digital and intelligent transformation, also contributed to the outstanding performance of the express delivery industry.

A man surnamed Li in Xiaoshan district, Hangzhou, east China’s Zhejiang province, was surprised by how fast the delivery was. According to him, he received his order just 5 minutes after paying the balance on Nov. 11 this year, at 00:35.

Such speed comes from digitization and intellectualization of the industry. Almost all Chinese express delivery firms have digitalized their parcels this year, giving each parcel a “digital ID” that makes it recognizable, traceable and distributable.

Besides, the industry is also profoundly changed by the full-cycle smart logistics. At warehouses, parcels are being sorted by smart robots; when it comes to line haul transport, big data technology weighs in to choose the best routes; at transfer centers, automatic sorting lines employed by each express companies add up to over 6,000 kilometers, and 76,000 packages can be sorted each hour; at the delivery end, more and more unmanned vehicles, drones, smart lockers and wearable devices are being employed to improve efficiency.

Though 70 billion parcels were delivered in China this year, the Chinese society is attaching more importance on environmental protection. Tremendous achievements have been made in trimming, greening and recycling the packages of express parcels.

During the “Double 11,” a recycling bin was placed near a parcel collection and distribution center at the west gate of the Communication University of China to recycle express parcel packages.

“After unpacking and checking the commodities, we can throw the packages in the bin,” said Chen Yue, a student from the university.

A number of measures were taken to ensure environmental protection during this year’s “Double 11,” such as the use of recycled bags and boxes for transferring parcels, the reduction of the use of wrapping tapes, as well as the avoidance of secondary packaging.

As the passion for online shopping continues rising and express services are more and more facilitated, China’s courier sector is bound to hit new records. The State Post Bureau predicted that more than 80 billion parcels will be handled in total this year.