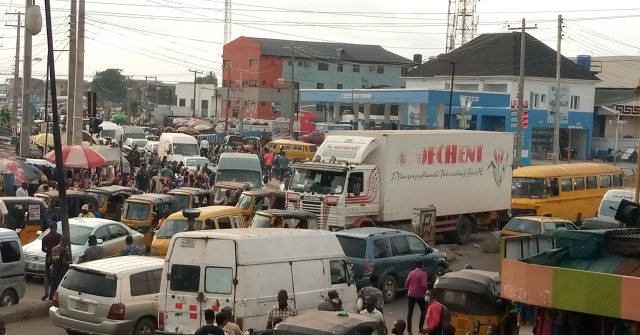 Alhaji Lateef Kayode Jakande a former journalist who became governor of Lagos State from 1979 to 1983, changed the housing statistics in Lagos State in just one tenure of 4 years by building more than 5 low cost houses Nick named Jakande estates.

Thirty seven years after, one of the estates entrance gate is nicknamed Oga’s ATM.

This is situated in Oke-Afa area of Oshodi/Isolo LGA or the Ejigbo LCDA.

The reason for the nickname is hidden, even though the operation is open and done with impunity. In 2013 the Lagos State government under Governor Babatunde Fashola dualized a 6km road from Jakande Estate gate to Ijegun, a suburb of Lagos thereby opening both social and economic activities in the area.

Back to the real story of Oga’s ATM, the impunity and lawlessness of motorcycle riders (okada) and tricycle (keke Marwa)m spoced with the hijack of Lagos by danfo drivers will normally surprise an onlooker as police, LASTMA, council officials and even NURTW all parade the place without any attempt to caution anyone or enforce traffic flow.

A thorough investigation revealed that over 1,120 okada, 175 tricycles and over 50 mini buses registered with Oga’s ATM company that constitute this nuisance contribute N200 for okada, N200 for tricycle and N300 for mini buses every day for the company (Oga’s ATM). This daily levy excludes the usual NURTW daily tickets, our investigation uncovered.

A quick calculation of the daily earnings for the Oga’s ATM is about N217,000, and a whopping N6,510,000 per month and an annual haul of N79,500,000. This is the price the public pays a few enemies of the society to lose their peace and right to use a government facility built for public good.

This pool of revenue excludes the hundreds of street traders that operate their stalls at every available spot with a cluster that makes it difficult for even a pedestrian to find a spot to step on. With their additional revenue, the clique must be smiling home every year with at least N80 million. When added to forced levies on organised businesses and corporate organisations around there, Oga ATM yields far more annual income for the gang.

This is not government revenue but the one exploiters have created out of government facility for themselves against public interest.

A further probe to understand who are the beneficiaries of this illegal tax and the forces behind the Oga ATM revealed that the criminal clique is operated by LASTMA, Landlords Association Executive body of the Jakande Estate, police, Local government officials and some other hideous interests. These make up the board members of this Oga’s ATM company. Little wonder that close to 10 years of dualization of the road, with different tenure of local police chiefs, LGA chairmen, LASTMA, landlord association exco’s in the area, nobody ever attempted to stop this impunity and lawlessness because of Oga’s ATM interest.

The benefit of ease of movement at that spot is lost. It is so bad that everyday, a new okada and keke parking lot springs up closer to the road and shrinking the space for movement.

Even corporate and other organized businesses in the area including banks, supermarkets, filling stations, service firms and many others have been subdued and lost their rights to do their businesses,

If only there is a government in Lagos, that lawless would long have stopped existing as crime is also thriving there since all movements crawl to near stop and leaving Lagosians at the mercy of people of questionable character and mission who have found nesting place there over the years.

Another loss the public suffers there is the perennial collapse of the road around that axis. The money the state government spent to construct the roads is lost as the congestion and refuse heaps generated around there compound the weight on the road. It took the personal intervention of a petrol station that came up around there some months to fix the lane that leads to Isheri from the spot.

The garbage generated from the illegal trading around at this spot has been a trouble for the state government to clear all year round.

Residents who have already given up on the chaos and live with it at high risk to their lives as motorists and others are constantly robbed at the logjam say it is only the state government that can rescue them from this menace they have lived with for years and don’t even know when it would end.