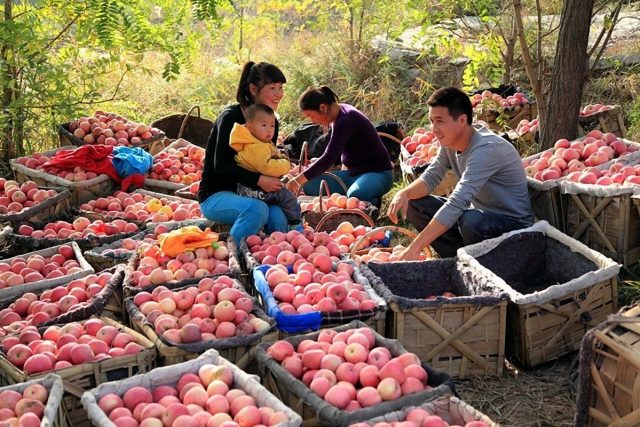 In June 2016, I had the rare privilege of visiting the most important location of the Chinese People’s Revolution.

That very peculiar place where the Communist Party’s shrine and museum are located means a lot to the history of China.

Welcome to the Yan’an city of the central Shaanxi Province. We had done a road travel of about five hours from Xi’an to arrive towards the close of the day in Yan’an.

With a natural inclination to beautiful landscapes, I immediately fell in love with Yan’an, a city buried in between tall spurs and scenic mountains, valleys and, streams, forests and complex bridges.

The road from Xi’an to Yan’an is what I dubbed track of tunnels as the tunnels along this road are beyond counting. That on its own is pointer to the peculiar mountainous topography of the region. A lot of bridge networks on the roads are simply amazing and wondrous.

But the little city on its own is another wonder.

It was the point where the historic Long March of the People’s Army of the Communist Party ended. The details record that after setting out with about 8,000 soldiers on foot from Jianxi in October 1934, not more than one tenth of the figure arrived the destination where the warriors holed themselves up strategizing and fighting back from about 1935 till 1949 when their struggle paid with the toppling of the ruling forces and the establishment of the People’s Republic.

The Long March took a full year to accomplish and with so much courage and determination. Looking at the topography of the area, you really wonder how a people accomplished such mission on foot, about 85 years earlier without aid of technology as we know today.

We had firsthand encounter with the original relics of the struggle adorning the museum of Yan’an; the offices of the revolution leaders like Mao Zedong, Zhou Enlai and many others. The scenes bring back to life the great and unequalled courage of the Red Army.

At a small town tucked away at the back of Yan’an, I had a chance meet with a man who was childhood contemporary of President Xi Jinping who told a wonderful story of the leader whom he met when he was a teenager and on his first party assignment at the Yanchuan village. That office where he served is today also a museum.

Here the natives have their house fused to the mountain walls that form part of the building. It is a traditional way of constructing a cave-like building with the advantage of protecting the dwellers from extreme winter cold. The natives call it yaodong.

They simply fuse their buildings to the mountains that serve as the building walls. It is like a shallow tunnel dug into the mountain with an arch door, with the space and compartments of the building reaching into the mountain belly. With the architecture, the top or ceiling of the building is concrete decking forming a semicircular arch as the rest of the roof is actually the body of the mountain. That saves them building materials and money and also the cave-like nature has an advantage during the bitter winter of the area when the mountains are totally covered with snow. It was in such cave that President Xi lived and worked. In fact, the relic of Mao’s office is also that same structure. Yaodong is the trademark of the area.
Directly opposite the former office of Mr. President is a humble yaodong and one of the 364 family homes. The home looks big compared with many others with a restaurant and small grocery shop fused to the west end and left side.
It is the home of a man of importance and news although many don’t know him. I engaged the old man that owns the home in a discussion that later turned important. The 77-year-old Pa Shi Yuxin is someone that knew President Xi so well. When the young man worked in that party office, Pa Shi was one of the leaders there. Prior to Xi’s coming, Shi had been party chief of Yanchuan in 1969.
In an interaction with him, as host of many of the visitors that were there to see what a yaodong home looks like, Shi revealed that he worked with President Xi in the office then and had fond memories of the man he said was a devoted worker, but with nothing so extraordinary to show he was going to be the leader of the country.
He said: “Oh, I remember him so well. We worked with him then, and that is why we were all happy when he became President of China. When he was here, he was the one that attracted government attention to build us a factory that processed agriculture output. Later in 1988, his efforts also brought electricity to this town. Even now he is in power, he has been here.
“I remember him as a tall young man that was so hardworking and devoted to the party. He was a very nice man we still remember the impacts he made on us. Then nobody would have imagined he would be the leader of the country. But he was really polite and well mannered.”
Asked if he met the president the previous year when he visited, Pa Shi’s old and dimming eyes brightened, and he said: “Yes, when he visited last year I was with him. He even still remembered me and called me by my name. He has a good memory. We really wish him well in the leadership of China because he is one of us.”
Pa Shi, an avid smoker, who reeked of leftover stench of an earlier smoking bout still had a stick of cigarette stuck to the top of his right ear the way a carpenter holds his pencil while at work. The stick was definitely the next victim of Pa Shi’s furnace.

Back to Yan’an by Zoom

As Pa Shi’s eyes brightened to remember young Xi Jinping, so I felt reading the message inviting me to Yan’an via Zoom. And I bet it was worth the effort.

After the two hours online tour and session, the answers to questions from journalists spiced up the excitement and gave more hint than I knew about the city in the belly of the valley and cordoned off by towering mountains.

Travelling through the Shaanxi, I observed that the region could be the apple zone of China as farms along the roads were mostly apple orchards.

Another official, Shen Junming of the poverty alleviation bureau explained more on what apple farming means to Yan’an, and general tourism.

Sun said: “As we all know, Yan’an is a world-famous holy land of the Chinese nation, a holy land of Chinese revolution, a national famous historical and cultural city and an excellent tourist city. At the same time, it is also the Yellow River natural heritage scenic spot and the Loess custom cultural experience place. It is one of the important birthplaces of Chinese civilization. In the territory of great China, Yan’an is not only a simple geographical term, but also a special cultural symbol and spiritual symbol.

Yan’an has magnificent mountains and rivers, magnificent scenery, long history and rich culture. There are 9,262 cultural relics and historic sites scattered all over the city, and 445 red sites are shining. In addition, there are more than 40 A-level scenic spots, four tourist performances, 59 kinds of snacks, 170 kinds of folk art categories, and more than 680 intangible cultural heritage projects There are many good-looking, fun, delicious things waiting for you.

Welcome friends from all over the world to Yan’an. I can serve as a guide for you, take you to the ancient bridge mountain of pines and cypresses, feel the breadth and profundity of Chinese civilization, visit the towering pagoda mountain, explore the power source of “Red China”, walk into the Liangjiahe River, interpret the “University question”, walk along the Yellow River, listen to the amazing waves of Hukou waterfall, and feel the Oriental philosophy of “turning the universe around”. Then, go to Huanglong Mountain virgin forest, go camping on Qinzhi ancient road, experience the uncanny craftsmanship of nature in Ganquan Grand Canyon, enjoy Wild Peony in Wanhua mountain, visit Magnolia heroine, experience the abundant grains of “good Jiangnan in Northern Shaanxi” in Nanniwan, play waist drum, sing folk songs, cut window flowers, and taste the rich loess flavor.

Finally, go back to the ancient city of Yan’an thousands of years ago, go to the “holy land valley. Jin Yan’an” in the Northern Song Dynasty, make a pot of tea, touch a section of guqin, and relax the tired body and mind.”

Shen, Deputy Director and member of the CPC Leadership Group of Yan’an City Poverty Alleviation and Development Bureau explained that:

“Since 2015, Yanan has conscientiously implemented the spirit of the important speech of general secretary Xi Jinping in poverty alleviation and prosperity in the old revolutionary base area of Shaanxi-Gansu-Ningxia, and declared war with poverty in the spirit of Yan’an. In accordance with the requirements of village and village, excellent and perfect families, the two sides achieved a win-win battle for ecological protection and poverty alleviation.

Second, the goal of “two no worries and Three Guarantees” has been achieved on schedule, and the sense of gain, happiness and security of farmers has been greatly improved. In 2020, the per capita net income of poverty-stricken households in the city is expected to reach 13,002 yuan, three times higher than that in 2014. All the 11,400 poverty-stricken households without the ability to work were provided with the basic security policy. The number of poverty-stricken students was 125,000. The “Three Guarantees” of basic medical care, serious illness insurance and medical assistance for the poverty-stricken population have been fully covered. Fifteen thousand households were relocated and 31,000 dilapidated houses were rebuilt. Compulsory education, basic medical care, housing safety and drinking water safety of the poor people are fully guaranteed.

Third, infrastructure and public services have been significantly improved, and rural social security capacity has been greatly improved. In 1,784 villages, the smooth rate of roads and buses, the coverage rate of 4G network, and the rate of electric power entering households all reached 100%. The coverage rate of standardized health rooms and power supply in 693 poor villages is 100%, and the living environment is clean and tidy.

Fourth, the grassroots governance capacity has been significantly strengthened, and the vitality of rural social development has been greatly enhanced. In 1,757 administrative villages, the secretaries of the party organizations and the directors of the village committees were “shouldered on one shoulder”. The first secretaries of villages and villages and the responsible persons for helping each household were assigned. We should promote the education and training of farmers, promote the change of customs, and cultivate the construction of civilized rural style. Rural reform has been steadily promoted, and the integration of urban and rural areas has been further accelerated.