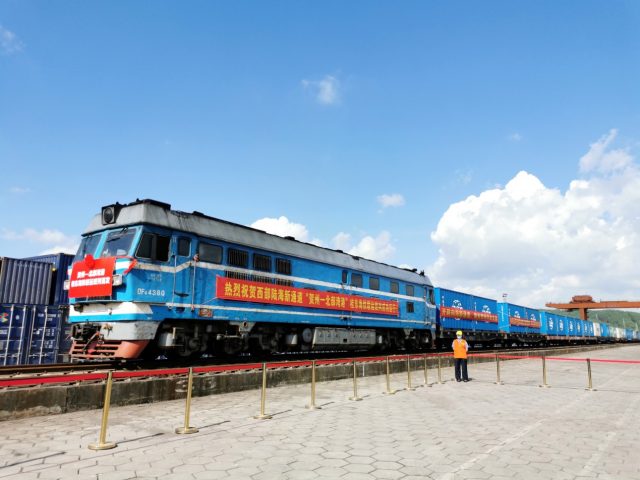 A land-sea corridor has been built to connect western China with the rest of the world during the country’s 13th Five-Year Plan period, or the last five years.

Along the New International Land-Sea Trade Corridor (hereinafter referred to as New Land-Sea Corridor), cargos from China’s western provinces and municipality such as Chongqing, Sichuan, Guizhou and Gansu are sent down south to coastal ports, and then shipped to the rest of the world by cargo vessels.

Thanks to the multimodal passage, oranges from Zhongxian county, Chongqing municipality have grabbed a market share in Singapore, and Malaysian durians are on hot sales at Chongqing’s supermarkets. In addition, light-duty trucks manufactured in the municipality are also exported to the Philippines.

The New Land-Sea Corridor has now developed into a mature international trade route. As of Nov. 30, a total of 2,717 trips had been made by freight trains between Chongqing and Qinzhou, south China’s Guangxi Zhuang autonomous region, transporting 9.84 billion yuan ($1.5 billion) worth of foreign trade commodities and 7.28 billion yuan worth of domestic trade commodities.

Logistics used to be a major bottleneck for Chongqing’s opening-up, as the western municipality is nearly 2,000 kilometers away from the Yangtze River estuary, a major sea gate of China in the east. However, the distance between the municipality and the Qinzhou port stands at only around 1,000 kilometers.

Therefore, Chongqing started planning a southward logistics channel in 2017, and the first regular freight train running on the passage departed the municipality on Sept. 25 the same year. The channel has offered a new choice for enterprises in western China – to go south and export their products in the west.

“It usually took nearly a month to export our products to Southeast Asia from east China, but the duration has been reduced to around a week if we do it in Guangxi’s Qinzhou port,” said Xiong Xiaohua, general manager of Chongqing Dajiang Power Equipment Co., Ltd. The company exports over $4 million worth of products to Southeast Asia on a monthly basis via the New Land-Sea Corridor, Xiong added.

What the new passage brings is efficiency. So far, over 500 categories of commodities are being exported through the New Land-Sea Corridor, to 249 ports in 95 countries and regions.

According to him, more than 6,500 TEUs (Twenty-foot Equivalent Units) of cargos with a worth of 6.5 billion yuan were transported via the above logistics channels from January to September this year. The multimodal transport has to the largest extent reduced the damage to commodities, said Liu Yizhen, general manager assistant of the company that operates the New Land-Sea Corridor.

The new passage also brings new trade rules, introducing international financial settlement methods to inland areas. “We have signed an agreement with the Bank of China, and are applying a ‘single waybill’ mechanism to improve efficiency,” said Liu, adding that the waybill also enables foreign trade companies to seek financing.

So far, the corridor has covered all 12 provincial-level administrative regions in western China, further improving their level of opening-up. Chongqing, Gansu, Sichuan and Guangxi saw 43.2 percent, 47.2 percent, 19.7 percent and 13.3 percent of growth in their foreign trade with the ASEAN countries last year, respectively.

The New Land-Sea Corridor is also injecting robust momentum to the development of western China. In October last year, 12 provinces in western China signed a framework agreement with the southern province of Hainan, and Zhanjiang in Guangdong province to jointly build the corridor, introduced Ba chuanjiang, director of the Chongqing Port and Logistics Office. In addition, Chongqing has also established an operating and organizing center for the corridor, and is currently working on a public information platform together with customs departments, ports and transport offices along the passage for win-win cooperation, he added.

Operators of the corridor in different provinces and municipality will conduct businesses and expand service network in the name of the operating company, Ba said, adding that they will work on the principle of extensive consultation, joint contribution and shared benefits, so as to help the western region of China participate in global resource integration and economic integration.