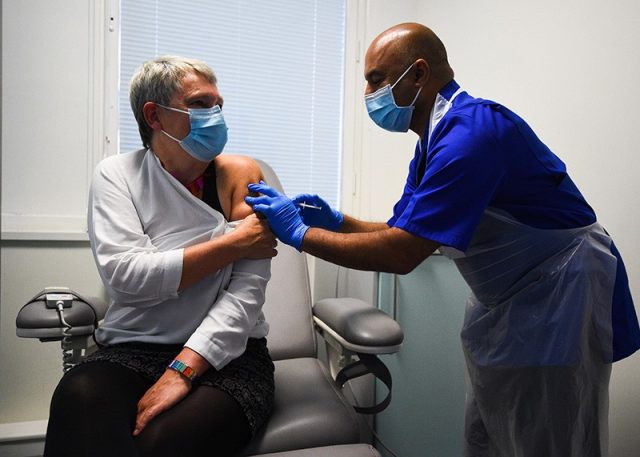 Novavax’s experimental shot is highly effective against the variant identified in Britain — but saw a worrying drop in efficacy against a lineage detected in South Africa.

The biotech firm Novavax has unveiled that its experimental vaccine is effective against rapidly spreading variants of the coronavirus. But its data bring good news and bad news: although the vaccine was more than 85% effective against a COVID-19 variant identified in the United Kingdom, it was less than 50% effective against a worrying lineage called 501Y.V2, which was detected in South Africa and is spreading around the world.

The findings, announced on 28 January by the team that led the South African trial, come from a pair of efficacy trials of Novavax’s protein-based vaccine. The South Africa trial has enrolled more than 4,400 participants, the UK trial around 15,000.

The South Africa study is the first in people to show, reassuringly, that the 501Y.V2 variant can be quelled using vaccines. Recent data from laboratory experiments had suggested that this variant was partly resistant to antibodies generated by people who had recovered from COVID-19, as well as to those triggered by other vaccines.

“We’re still seeing vaccine efficacy, and that’s incredibly important,” said Glenda Gray, head of the South African Medical Research Council, at a press briefing announcing the findings. “This will have both an individual and a

But the results raise the worrying possibility that 501Y.V2 and similar variants will cause a significant drop in the effectiveness of other vaccines, says David Ho, a virologist at Columbia University in New York City. His team was one of several that linked 501Y.V2 to a drop in potency of antibodies elicited by the Pfizer and Moderna vaccines, which are both based on RNA.

It was only by chance that the South African trial of the Novavax vaccine was able to measure the effects of 501Y.V2. In late 2020, the variant was identified and linked to a fast-growing epidemic that started in the country’s Eastern Cape province and has since spread across the country and well beyond. The variant now accounts for more than 90% of COVID-19 cases in South Africa,

and it carries several mutations in the SARS-CoV-2 spike protein — the immune system’s main target against coronaviruses and the basis for most vaccines, including Novavax’s.

“None of the vaccines were necessarily designed against this variant,” said trial leader Shabir Madhi at the briefing. “It’s a very different virus that’s infecting people in South Africa right now,” added Mahdi, a vaccinologist at the University of Witwatersrand in Johannesburg.

The 501Y.V2 lineage spread so rapidly that it caused nearly all of the COVID-19 cases that the trial recorded. In the group of people who received two vaccine doses, 15 developed COVID-19, compared with 29 of the participants who received a placebo injection. This equates to an efficacy of 49.4%. The study enrolled 240 people who are HIV-positive, and when Madhi’s team excluded this group from the analysis, the vaccine was 60% effective.