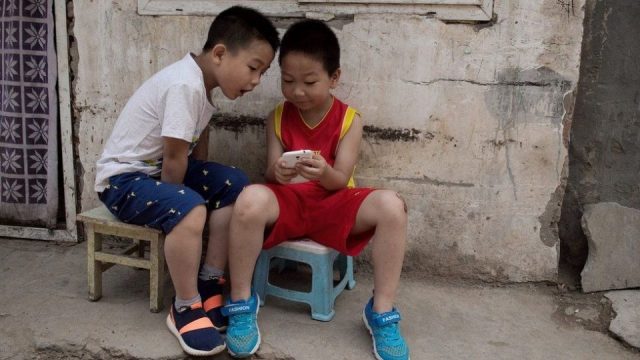 Children in China are to be banned from using their phones in school, the Ministry of Education has ruled.

Pupils will not be allowed to bring mobiles to school without written parental consent.

Schools are being encouraged to find other ways for parents to communicate with children during the school day.

According to one of the country’s newspapers, China Daily, there has been heated debate among parents over the whether the ruling is practical.

The vast majority of children and teenagers in China access the internet via their own smartphones – 74% of under-18s, according to the government-affiliated China Internet Network Information Centre.

But the authorities are concerned about how internet use is affecting the health of the nation’s youth.

There have been rising levels of nearsightedness among children in China and in 2018, the authorities announced plans to regulate the gaming industry which was partially blamed for the problem. They also cited concerns that gaming addiction was damaging mental health.

The following year a curfew was imposed on under-18s, who were restricted to 90 minutes of gaming on weekdays and three hours on weekends and holidays.

Many schools in China already restrict the use of mobile phones on their premises. In some extreme cases, phones have been smashed in front of students who have broken the rules.

Some 27,000 people voted in an online Sina News poll, with most saying there was no need for the new rules because of the widespread ban during school hours. Some pointed out that children may continue to over-use their phones when not in school.

A plan to stop schools setting homework tasks via phone has also been criticised. One teacher told state broadcaster CCTV that “not allowing phones to contact someone, or to arrange homework, that will take some getting used to. They all get so much homework, so that’s been convenient.”

French lawmakers voted in 2018 to ban the use of phones in primary and middle schools, ruling that children under 15 have to keep their mobile phones out of sight while on school premises.

A survey conducted in the UK by price comparison site uSwitch last year suggested that just under half of UK parents thought their child’s school should ban mobile phones.

The use of phones in the UK is generally left up to individual schools. One head teacher, from Anglesey in Wales, told the BBC that teachers could find themselves spending too much time challenging children for using phones, which took time away from actually teaching them.