After USA announced the endorsement of Nigerian renowned economist and former finance minister, Dr. Ngozi Okonjo-Iweala for the World Trade Organisation (WTO) top job, it is as good as done that she is director-general designate of the WTO.

The coast cleared for her ascendance after her only contender and trade minister of South Korea, Yoo Myung-hee backed out from the race early February.

As a lone contender already endorsed by all 164 members of the WTO, taking the stepping down to imply that South Korea has queued behind her, it is a matter of when she would be announced the DG.

But if there is an international job that would be strenuous now, Okonjo-Iweala’s coming mission is that. She would step in at a time the world economy is in a very terrible shape and yearns for quick fixes.

In addition to the normal tide, Okonjo-Iweala would be the first female to lead the WTO as well as first African. Those two firsts would also be two additional burdens to prove a point.

I am sure she is not unaware of those extra tasks on her way, and I recall her boasting that she is used to tough tasks including fixing the Nigerian economy at the inception of democracy in 1999 and later the post global economic meltdown era during her second coming.

But her pending task is the world economy, far more complex and larger than Nigeria’s.

The WTO is one of the major agencies of the United Nations that drives the global trade economy in a world of fast-paced change and swift movement of goods and services.

On its importance, the body coached in an article on its website that: “Integration into the world economy has proven a powerful means for countries to promote economic growth, development, and poverty reduction. Over the past 20 years, the growth of world trade has averaged 6 percent per year, twice as fast as world output. But trade has been an engine of growth for much longer.”

Like Bill Gates book: Change at the Speed of Thought, she needs to work at the speed of the frenzied factors that drive the supersonic levers of the world economy today.

She would come like someone on special mission to rebuild a collapsed house. The world economy and trade crumbled under the searing Covid-19 impacts in 2020, and yet to recover.

While the devastating coronavirus pandemic gale blew over all countries, another devastation to global trade was also with prolific wrong zest making landfalls on several countries and regions.

That other devastation was Trump-made. President Donald Trump of the USA had in May 2018, with China and in 2019 with the European Union, India, Canada and others furthered his pet project of weaponizing tariffs to get at other economies in the implementation of his America-First agenda.

But away from these, Okonjo-Iweala is like a candidate flying the African flag for the first time at the WTO. The pressure would be on her to deliver to Africa a better trade deal. This task seems to be the toughest for her for the reason that the WTO is concerned with only the business of world trade and trade facilitation.

Only those that have goods engage in trade. Unfortunately, Africa scarcely has goods to trade with the world. That is the reason the continent’s export quota was 2.4% of world volume in 2018, with the sub-Sahara Africa, holding only 1.7% of that. Even within Africa, the bloc trades only 16 percent made-in-Africa goods while the EU has as much as 64% and Asia, about 67% of their own goods in their markets.

I recall a visit to the Nansha port in Guangzhou, China in September 2016, just after leaving Hangzhou where I covered the G20 Summit. The information I got from the management of the port is that China imports mainly raw materials from Africa which they process and add value to. That is not the fault of China, but that of Africa that still hasn’t prioritized manufacturing in the 21s t Century.

I was told that 30 percent of such imports from Africa come from the Lagos port. Although Okonjo-Iweala is Nigerian but her role in the WTO saddle would not include growing manufacturing in Africa. It is only trade terms.

In July last year, all the continental development banks, the IMF, WTO and the World Bank held a global parley to chart a course for the revival of international trade during and post-Covid-19 era. The Africa Development Bank was part of it with $1.06 billion it pledged for Africa international trade enhancement. The coronavirus pandemic, according to the United Nations Conference on Trade and Development (UNCTAD), caused a slump of 6.5% in global trade.

The president of the AfDB, Akinwumi Adesina was a colleague of Okonjo-Iweala at the Nigeria federal cabinet, and the two would prove a good partnership to create ways of swinging Africa to growth in international trade as major or bigger exporter. But that can never work out amazing dividends unless Africa has something to sell to the world. So solving Africa’s backwardness in export trade should not be foisted on Okonjo-Iweala but on the African market to grow their local economies in manufacturing. With a better face, the WTO would give further impetus.

The WTO has entrenched rules on how it assists poorer economies but that doesn’t include encouraging manufacturing, just trading in ready goods.

WTO wrote concerning poorer economies that: “This process of trade opening takes place in the framework of WTO rules, which take into account the fact that some countries are better equipped than others to open their markets widely. Some countries, for instance, have a more advanced legal, regulatory and physical infrastructure than others. As a result, average tariffs (import duties) in developed countries, at least for manufactured goods, are much lower than in developing countries.

“Traditionally, tariffs were used simply as a political tool to protect certain vested economic, social, and cultural interests. The WTO is committed to lowering barriers to trade. The world’s nations meet through the WTO to negotiate how they can reduce barriers to trade, such as tariffs.”

For the other tasks of patching up the cracks created by the trade wars, she had assured in October 2020 of her readiness to reconcile China and the US. Beyond these two, the EU-US simmering trade anger needs to be assuaged.

Trump’s unconscionable way was confirmed in two decisions by the WTO, one side in favour of China and the other benefitting the EU over his tariff wars.

On the China side, on September 5, 2020, WTO decided that “the U.S. sanctions on $200 billion Chinese goods are illegal and violated longstanding international trade rules. Beyond the ruling however, a viable resolution of the issues must come from bilateral diplomatic agreements and concessions that would need Okonjo-Iweala’s tact and diplomacy.

On November 20 last year, the European Union made good its threat of retaliatory tariffs on US goods worth $4 billion. This came after the WTO also ruled in favour of the EU that the trade sanctions Trump unleashed on the EU was illegal. Products targeted in the EU trade row included foods, drinks, equipment and jets. The tariffs took effect on November 10.

So the stakes are so high already that an incoming DG of the WTO must first reconcile the major trading forces and blocs, not leaving out India, Canada and Brazil.

Brazil became mega international trade force as the only country outside China that benefitted and made positive trade balances during the Covid-19 downturn. Brazil reaped bounties with upswing of food exports ranging from frozen beef whose sales climbed from $464m in April 2020 to $639m in May.

China on her part regained export momentum from April 2020, just a little after her Covid-19 eased with mainly the pandemic consumables ranging from nose masks to PPEs, ventilators, hand gloves and more.

So a world poorer because of divisions, the global pandemic and traditional poverty of the African bloc, needs trade opening up to bounce back to winning ways. The chief executive to come has the major task of driving that desired improvement. 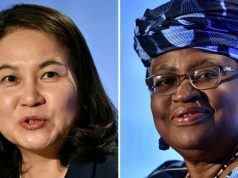