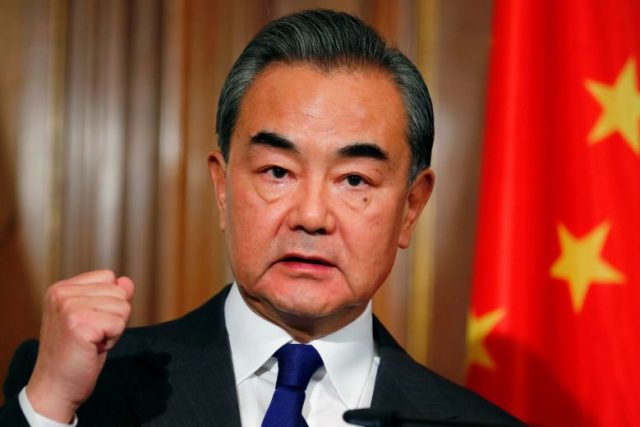 A top Chinese diplomat urged the U.S. to stop “crossing lines and playing with fire” on Taiwan, as part of a broad series of warnings to President Joe Biden against meddling in Beijing’s affairs.

Chinese Foreign Minister Wang Yi said at his annual news briefing on Sunday there was “no room for compromise or concessions” in Beijing’s claim to sovereignty over the democratically ruled island. Wang’s response on Taiwan was one of several in which he hit out at the U.S. for “willfully interfering in other countries’ internal affairs in the name of democracy and human rights.”

“It is important that the United States recognizes this as soon as possible,” Wang said on the sidelines of the National People’s Congress in Beijing. “Otherwise, the world will remain far from tranquil.”

At the same time, Wang reiterated China’s willingness to work with the U.S. to address shared concerns about the Coronavirus pandemic and the global economy. “I hope China and the U.S. restarting cooperation on climate change can also bring a positive change of climate to bilateral ties,” Wang added.

While China has expressed optimism that relations would improve under Biden, it continues to put the onus on Washington to fix the damage done during Donald Trump’s four-year tenure. On Sunday, Wang cited Beijing’s battle with “hegemony, high-handedness and bullying” and “outright interference in China’s domestic affairs” in a list of the country’s diplomatic accomplishments over the past year.

The Biden administration has pledged to put greater emphasis on human rights and building an allied response to China, even as it quiets down the anti-Chinese rhetoric of the Trump era. U.S. Secretary of State Antony Blinken last week called dealings with China the defining test of the century, describing Washington’s intended approach to Beijing as “competitive when it should be, collaborative when it can be and adversarial when it must be.”

Defense Secretary Lloyd Austin later suggested during an interview that the U.S. would bolster support for Asia-Pacific allies in the face of “very aggressive” actions by China. “In some cases, they have been coercive. And some of that coercion has been directed against our allies. And our allies are very important to us,” Austin said Sunday on ABC’s “This Week.”

Chinese Defense Ministry spokesman Senior Colonel Wu Qian separately defended the country’s projected 6.8% increase in defense spending this year — up from 6.6% last year — as “justified, reasonable and beyond reproach,” according to a transcript posted on the agency’s website Monday.

China appears to be trying to reestablish a status quo shattered under Trump. The previous U.S. administration, among other things, sanctioned senior Chinese officials over human rights practices in Xinjiang and Hong Kong, approved the highest-level cabinet visit to Taiwan in four decades and imposed tariffs on about $335 billion of Chinese goods annually.

The briefing Sunday was the latest indication that tensions between the world’s two largest economies may continue. Wang’s remarks echoed those of Yang Jiechi, the head of the ruling Communist Party’s foreign affairs body, when he urged the U.S. not to cross China’s “red lines.” State media recently complained that Biden’s early policies were similar to those of his predecessor.

“We urge the new administration in the U.S. to fully recognize the high sensitivity of the Taiwan question,” Wang said, urging the U.S. to stop “the approach of crossing lines and playing with fire of the previous administration, and properly and cautiously tackle” the issue.

On Monday, the Mainland Affairs Council in Taipei issued a text message reaffirming its opposition to Beijing’s claim over Taiwan. The Republic of China — Taiwan’s formal name — has never been part of the People’s Republic, the agency said. “We once again urge China authorities to face and respect the cross-strait reality and public opinion in Taiwan,” it said.

Here are some more highlights from Wang’s briefing:

Xinjiang issue: “The claim that there is genocide in Xinjiang couldn’t be more preposterous. It is just a rumor fabricated with ulterior motives and a lie through and through.”Europe relations: “China and Europe are two important players in this multipolar world. The relationship is equal. It is open. It is not targeting any third party or controlled by anyone else.”Vaccine diplomacy: “We’re also ready to work with the International Olympic Committee to provide vaccines to Olympians.”Hong Kong crackdown: “Hong Kong’s shift from chaos to stability fully serves the interests of all parties. It will provide stronger guarantees for safeguarding Hong Kong citizens’ rights and foreign investors’ lawful interests.”Trade: “The answer is not to retreating to protectionism, isolation or decoupling, but to work together to make globalization open, inclusive, balanced and beneficial for all.”Japan tensions: “I hope that Japanese society will embrace a more objective and rational conception of China, and solidify public support for long-term steady progress in China-Japan relations.”Indian border:

“The rights and wrongs of what happened in the border area last year are clear, so are the gains and losses. The facts once again prove that unilaterally creating confrontation will not solve the problem.”South China Sea disputes: “The U.S. and other Western countries frequently stir up troubles in the region, trying to drive a wedge using the South China Sea issue. They have only one purpose: to sabotage peace and disturb regional stability.”Russia cooperation:

“We will set the example of strategic mutual trust by firmly supporting each other in upholding core and major interests, jointly opposing color revolutions, countering disinformation, and safeguarding national sovereignty and political security.”