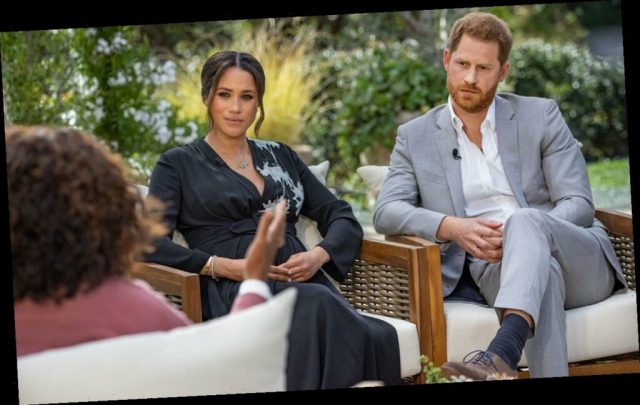 Prince Harry and Meghan Markle shocked Oprah Winfrey in a wide-ranging and deeply personal interview that aired on CBS Sunday night. Perhaps the most shocking, in a moment that nearly left Oprah speechless, Meghan alluded to possible racism within the royal family.

According to Meghan, when she was pregnant with her and Harry’s son Archie, a senior member of the family had expressed concern to Harry on multiple occasions about how dark his skin might be due to Meghan being of mixed race. On top of that, Archie, the first person of color to be born into the royal family, would not receive a title or security from the family. Oprah asked if she thought it was because of his race, admitting that it was a “loaded question.” Meghan responded with, “But I can give you an honest answer.” Meghan then explained, “In those months when I was pregnant, all around this same time — so we have in tandem the conversation of ‘He won’t be given security, he’s not going to be given a title,’ and also concerns and conversations about how dark his skin might be when he’s born.”

Meghan clarified that the conversations about Archie’s skin tone were had with Harry, not with herself. Neither one was willing to divulge who had these concerns. Oprah asked Harry about Meghan’s allegations when he eventually joined the interview, and he said that even before they were married, there were questions about what their children might look like, but he wasn’t willing to add much more than that.

“That conversation, I’m never going to share,” Harry said. “But at the time, it was a bit awkward. I was a bit shocked.” He later added, “There were some real obvious signs before we even got married that this was gonna be really hard.”

Another jaw-dropping moment came when Meghan admitted to having suicidal thoughts early in her marriage as the tabloids constantly attacked her.

“I just didn’t want to be alive anymore,” Meghan told Oprah. “And that was a very clear and real and frightening constant thought.” Meghan later added, “I thought it would have solved everything for everyone.”

Things got so bad for Meghan that despite what she was going through, even on the same day she told Harry what was going on, she accompanied him to an event because she was afraid of what she might do to herself if left alone. But what might be more shocking was the response she got when she sought help. According to Meghan, she approached a member of the “institution” and expressed her feelings and her desire to get professional help, but was told she couldn’t because “it wouldn’t be good for the institution.”

Meghan also took the opportunity to clear up a story that came out several months after her and Harry’s wedding. According to the story, in the days leading up to the wedding, Meghan made Kate Middleton, Prince William’s wife, cry over a situation having to do with the flower girls’ dresses. According to Meghan, the issue was correct, but Middleton was the one upset over the dresses and had made her cry.

“A few days before the wedding, she was upset about something pertaining — yes, the issue was correct — about flower girl dresses, and it made me cry, and it really hurt my feelings,” Meghan said. “And I thought, in the context of everything else that was going on in those days leading to the wedding, that it didn’t make sense to not be just doing whatever — what everyone else was doing, which was trying to be supportive, knowing what was going on with my dad and whatnot.”

But the entire interview wasn’t just airing the dirty laundry of the royal family. When Harry joined Meghan and Oprah, he revealed the sex of their second child. Harry and Meghan could barely contain themselves as he announced to the world that they will soon be welcoming a baby girl into the family.

“To have any child, to have any one or any two would have been amazing,” Harry said. “But to have a boy and then a girl, what more can you ask for.”

Obviously, Twitter exploded with reactions to the interview. There has been a huge outpouring of support for Harry and Meghan, while many people are hating on the royal family.