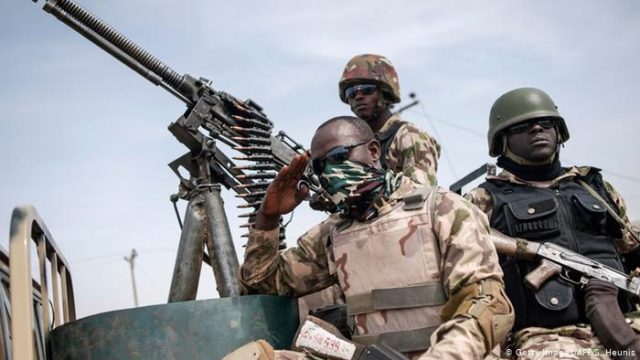 The Nigerian military has issued a statement denying massacre of civilians in Konshisha, Benue State as reported.

The statement signed by Brig. Gen. Onyema Nwachukwu however clarified that what the solders killed in the are were 10 bandits who engaged the soldiers deployed to the area to quell communal clashes in gun duel.

Nwachukwu said soldiers who were on their way to reinforce their colleague troops already routed by the same bandits were attacked in ambush, and it was in their bid to defend themselves that the shot dead the 10 attackers.

The military denied any massacre of civilians as reported and challenged accusers to present evidence of such claimed massacre.

The statement said: “The attention of the Defence Headquarters is drawn to numerous publications in the media and other online blogs reporting massive killing and destruction of houses and other property by the military in Konshisha LGA of Benue State.

The Defence Headquarters which has oversight responsibility for Operation WHIRL STROKE deployed to maintain peace in Benue, Nasarawa and Taraba states, has deemed it necessary to refute these spurious allegations and put the records straight.

There have been incessant cases of communal clashes in recent times between the people of Konshisha and Oju over boundary demarcation. As part of efforts to resolve the crisis, the Benue State Government held series of meetings with stakeholders from both local governments to arrive at amicable solution to the problem. Appreciable progress has been made and a final date fixed for all stakeholders to meet in the disputed areas to fully demarcate the boundary so that peace could reign. Trouble however started on the eve of the final meeting during Easter holiday, with reports that fresh fighting had broken out in the area.

All along, 72 Special Forces Battalion has troops deployed on the Oju side of the boundary and troops of the Battalion were on their way to replenish their colleagues on 5 April 2021, when they were attacked by armed bandits at Bonta in Konshisha. The troops who were under command of a Captain were seized at a checkpoint mounted by the so called “Bonta Boys” and taken into Konshisha forest where they were all brutally murdered. Not satisfied with killing the soldiers, the bandits proceeded to burn all the eleven soldiers and their officer beyond recognition while their weapons and ammunition were taken.  Military reinforcements were dispatched to Bonta the following morning. Unfortunately, the reinforcement also came under attack from close to 500 armed youths who by this time had fully occupied Bonta. The sheer number of youths involved in the attacks suggest that the armed bandits cannot be from Bonta alone, but were joined by bandits from other parts of Konshisha LGA. The military repelled the attack after more than 4 hours of intense fighting during which military helicopter provided close air support to ground troops. Ten armed bandits were killed during the fight with the rifle of one of the killed  in action soldiers recovered from the bandits who fell casualty during the exchange of fire.
The Defence Headquarters wish to put it on record that apart from this initial 10 bandits, there are no other civilian casualties recorded in any part of Konshisha till date.

We therefore challenge anybody from Konshisha to present to the public the 200, 70 or 30 dead bodies of innocent persons, male, female or children killed by troops in Konshisha. There was never a massacre as being touted by some mischief makers.