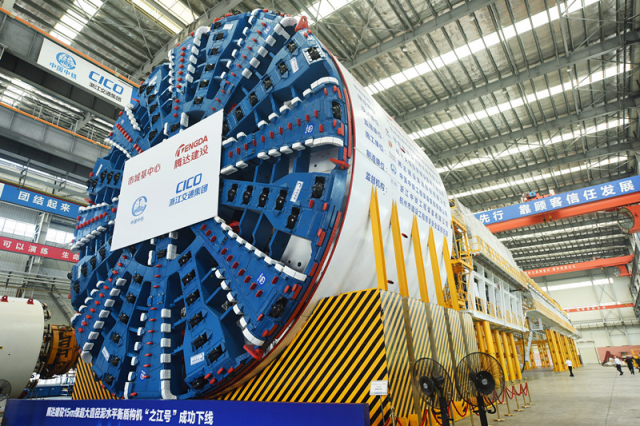 China’s national economy maintained momentum for stable recovery in the past April, with the demand for production continuing to rise, employment and commodity price being stabilized, and new growth drivers being fostered.

According to statistics released by the National Bureau of Statistics (NBS) on May 17, the value added of high-tech manufacturing grew 12.7 percent year on year, and the total retail sales of consumer goods increased 17.7 percent last month. Besides, the urban surveyed unemployment rate was 0.2 percentage points lower than that in March.

A few days ago, a 15-meter diameter super-large shield tunneling machine that can balance water and mud rolled off the production line in east China’s Zhejiang province. Zhao Hua, general manager of China Railway Engineering Equipment Group Co., Ltd., the company that developed the machine, introduced that the diameter of the tunneling machine is equal to the height of a five-storey building. The 120-meter-long and 4,300-tonne giant will play an important role in Zhejiang’s water pipeline projects and road reconstruction projects, Zhao added.

During this year’s Tomb-sweeping Day holiday in early April, Chinese people made a total of 102 million visits, up 144.6 percent from a year ago. China UnionPay reported online transactions of 903.6 billion yuan ($140.38) in the three-day holiday, up by 3.6 percent from that in 2020. The consumption sector just displayed the vitality of the Chinese economy.

Both the Purchasing Managers Index (PMI) of the manufacturing sector and the business activity index of the service sector have been maintained above the critical point, which suggested improving vitality of enterprises.

China maintained general stable employment situation and saw steady decline of unemployment rate. On a job fair of flexible employment held by southeast China’s Fujian province, 5,549 jobs were offered by 15 enterprises, including couriers and warehouse managers. Northwest China’s Qinghai province has built a matchmaking platform for job seekers and enterprises, and central province of Hunan initiated a program that aims to offer vocational training for 360,000 people and issue entrepreneur loans of 12 billion yuan by the end of 2023. Hunan is striving to assist over 60,000 people in starting businesses.