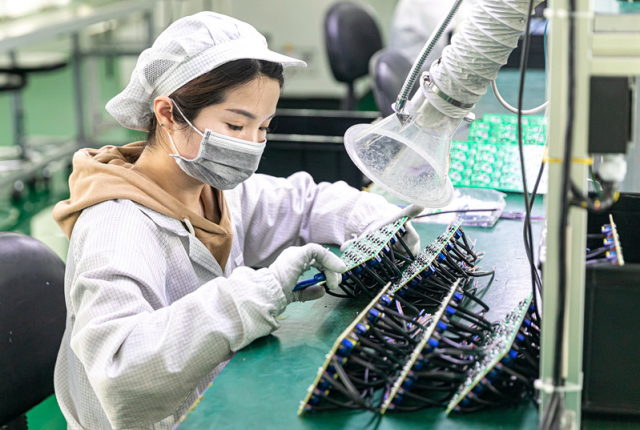 Foreign direct investment (FDI) into the Chinese mainland, in actual use, rose 38.6 percent from a year ago to 397.07 billion yuan ($61.55 billion) in the first four months of this year, according to statistics released by China’s Ministry of Commerce (MOFCOM).

A total of 14,533 foreign-invested enterprises were established nationwide during the same period, up 50.2 percent year on year, or an increase of 11.5 percent over the same period in 2019.

Since the beginning of this year, multiple major foreign-funded projects have been implemented. For instance, a verbund chemical production site in south China’s Guangdong province, whose investment totals $10 billion, has celebrated consecutive 500,000 safe working hours for its initial phase. In east China’s Jiangxi province, a manufacturing base for power chips funded by foreign investors also commenced building.

According to the 2021 Business Climate Survey issued by the American Chamber of Commerce in China, 61 percent of the interviewed foreign enterprises considered China as one of their top three investment destinations in their recent global investment plans.

As a witness and beneficiary of the opening up in China’s financial sector, Allianz China Holding supports the country to open wider and encourages foreign financial institutions to invest in China, said Solmaz Altin, general manager of the company. China has become an important strategic market of the company, he added.

According to the Outline of the 14th Five-Year Plan (2021-2025) for National Economic and Social Development and the Long-Range Objectives Through the Year 2035, China will promote the construction of all kinds of open platforms in a coordinated manner, and build new high grounds of opening up at higher levels, with better business environment, and covering wider areas.

On April 9, China’s State Council approved Tianjin, Shanghai, Hainan and Chongqing to proceed with the comprehensive opening-up trials in the services sector over the next three years. Foreign investment in the service industry came in at 312.94 billion yuan during the January-April period, up 46.8 percent year on year.

In Tianjin Economic-Technological Development Area (TEDA), an MLCC (Multi-layer Ceramic Capacitors) plant of South Korea’s Samsung Electro-Mechanics is under construction. The plant is expected to be put into operation before the end of June this year.

Samsung selected TEDA for its complete industrial chain and transport infrastructure, as well as preferential policies, said Deuk-Kyu Hwang, head of Samsung China, adding that Tianjin has become an important overseas manufacturing base for the South Korean multinational corporation.

Teresa Zhuge, co-president of Global Logistic Properties’ (GLP) China business, noted that the company’s annual investment in China has exceeded 1 percent of the total annual FDI into China for the past 10 consecutive years, and the company will keep investing in the country.

“What attracts GLP is not only the huge Chinese market, but also the increasingly improved business environment,” she explained.

At the end of the last year, GLP, together with other investors, jointly established a new fund of nearly 4.5 billion yuan for investing in modern logistics assets at Shanghai’s GLP Park Lingang.

China’s door will open wider and wider to attract foreign investment, said MOFCOM spokesperson Gao Feng. The country will keep revising its foreign investment negative list this year to further reduce restrictions, he added. Besides, China will implement the foreign investment law and relevant regulations, and carry out legislation, amendment, and revocation of supporting policies. Services will be better guaranteed for major foreign-funded enterprises and projects to speed up the implementation and construction of foreign-funded projects, and the legitimate rights and interests of foreign investors will be better protected to improve the transparency and convenience of investment.