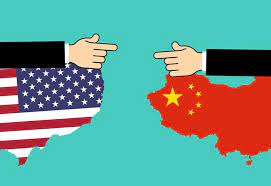 The embassy spokesman, Mr. Zhang Hang countered Mary Beth Leonard, US chief envoy in Nigeria that: “the so-called “international epidemic prevention gap” does not exist, nor do experts of Taiwan region lack channels and platforms to share response and control practices with others.

“As COVID-19 pandemic continues to rage globally, it is the high time for responsible international community members to show solidarity, instead of politicizing health issues and interfering with other countries’ internal affairs.”

Zhang said “I was caught by surprise to read in a local newspaper an article entitled “Taiwan’s exclusion from the World Health Assembly undermines global health” by Her Excellency Mary Beth Leonard, U.S. Ambassador to Nigeria, indicating China wrongfully blocked Taiwan from participating the WHA.

Let us find out what really happened. On May 24, The General Committee and the Plenary session of the 74th WHA respectively decided to reject the so-called proposal of “inviting Taiwan to participate in the WHA as an observer” submitted by certain countries. Can China succeed in doing this alone? No, actually among 194 members of the World Health Organization, more than 150 countries, including Nigeria voiced their support for China, and more than 80 countries sent letters to WHO to express their commitment to the one-China principle and opposition to Taiwan’s participation in the WHA. Were all these countries wrong? Absolutely not.

WHO is an international organization only sovereign country can join. Taiwan is not a sovereign country, it is an inalienable part of China. The Resolution 2758 of the United Nations General Assembly (UNGA) in October 1971 and the Resolution 25.1 of WHA in May 1972 had already provided the legal basis for the WHO to abide by the one-China principle, and recognized Taiwan as part of China. One-China principle is an international consensus and adhered by 180 countries including the U.S.A..

Taiwan region’s participation in the WHA must be handled in accordance with the one-China principle and through cross-strait consultations. The incumbent authorities in the Taiwan region since 2016 obstinately adhered to the separatist position of “Taiwan independence” and refused to recognize that both sides of the Taiwan Strait belong to one and the same China. As a result, the political foundation for the Taiwan region to participate in WHA has ceased to exist.