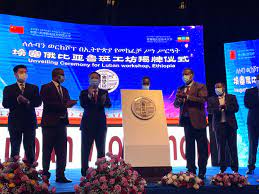 Habtamu Sisay, a young automotive engineering instructor at a public technical and vocational training college in Ethiopia, aspires to play a useful role in advancing the country’s mechatronics and robotics technologies.

Sisay, now undertaking his Master’s Degree in automotive engineering at the Ethiopian Technical University (ETU) in the country’s capital, Addis Ababa, always hopes to further sophisticate his education. However, his aspiration had remained virtually impossible due to the lack of well-equipped facilities.

“Despite recent improvements in terms of access to modern facilities, it is very difficult to engage in sophisticated mechanical and robotics technologies in particular due to the lack of such facilities in our country,” Sisay told Xinhua recently.

But the recently launched Chinese-built Ethiopian Luban Workshop becomes an important facility to bridge the gap as it offers high-end technical skills training to help college students meet the requirements of the emerging global market.

The workshop facility, which was launched last month inside the premises of the ETU, was established by the Chinese Tianjin University of Technology and Education under the guidance of the Ministry of Education of China.

Sisay was fascinated after he visited firsthand the world-class technologies installed inside the workshop, including state-of-the-art techs in the AI sector.

“With the launching of the Luban Workshop, we will be able to directly engage in practical classes with the help of the modern machinery,” he added.

The workshop is mainly focusing on training of mechatronics, which is a combination of different disciplines such as mechanical, electrical, information technology, as well as Artificial Intelligence and robotics.

“These technologies are emerging technologies in the world. They are advanced and 21st century technologies; and they are very, very important for the industrialization agenda of our country,” Teshale Berecha, President of ETU, told Xinhua in a recent interview.

According to Berecha, the facility will accommodate about 150 students at a time, with a capacity of training different batches of students every year.

In September 2018, China announced that 10 Luban workshops would be established in Africa to provide vocational skills training for African youths, under the framework of the Forum on China-Africa Cooperation.

Since Africa’s first Luban Workshop was launched in Djibouti back in March 2019, a number of African countries such as Nigeria, Kenya and Uganda have launched world-class Luban Workshops with the aim of providing quality vocational training to local people, the youth in particular.