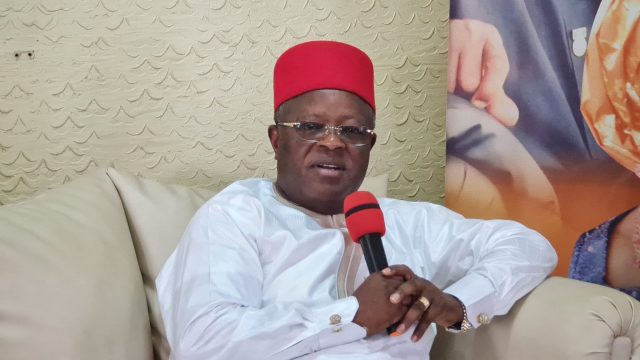 The chairman of the South East Governors Forum and Ebonyi State governor, David Umahi has said that there is the possibility of South East governors coming together to declare a day for the remembrance of heroes and millions of victims of the Biafra/Nigeria civil war.

Umahi made this known in his response to questions on the sit-at-home order of the Indigenous Peoples of Biafra (IPOB) that crippled the entire Zone on Monday.

The order was so sever that even nearby Asaba of Delta State, though part of the Igbo land, was affected.

In his reaction to the implications of the order, Umahi drew a parallel with some regions and reasoned that in the South West Nigeria, June 12 since after MKO Abiola’s death has been observed as public holiday in his honour as a champion of democracy,

The governri argued that there is no disputing the fact that the region lost millions of their people during the 30 months war and nothing is done about that piece of history to accord the heroes any honour of remembrance.

Fifty one years after the war ended, he said it is becoming more likely that the region might declare a day to remember those victims and use that as platform to reflect on what caused the war, to learn from the experience and live better avoiding those same mistakes today.

Umahi said such move with the right motive is encouraged and may like come to be, soonest.

“We have a duty to remember our people killed in the war and there is nothing against the law in that, so we can’t keep living and behaving like it didn’t happen. I am sure nothing is wrong with having a day to reflect on the past and prepare for a better future where the mistakes of the past would be avoided. Therefore, having such a day of remembrance in the region is a high possibility. Our late leader that led that war in his lifetime had said that there would be no need for another war as other options exists for peace and negotiation.”

He assured that before taking a final decision on the plan, the governors and leaders of the region would think through its meaning, procedure and intention as a way of fostering better unity for the country.

Also responding to his positions before the IPOB order of Monday, he said his positions prior were not conflicting as no governor or person has the powers to compel anybody that who doesn’t want to open his her shop or step out to do so because of someone who gave an order.

He also noted that even today there is no order to sit at home, anyone that stays home would not be offending any laws.