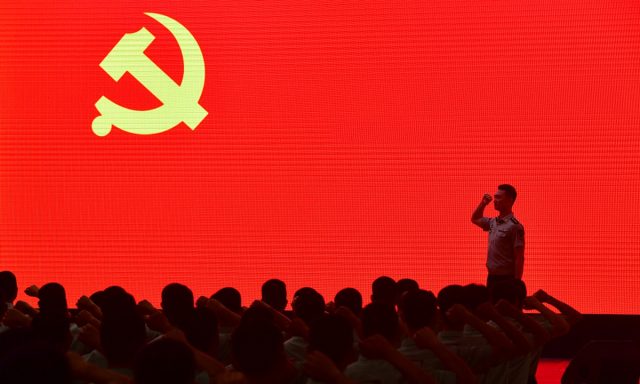 In 2016, someone raised a question on Quora, a popular American Q&A platform, asking why educated Chinese hadn’t started a color revolution–a protest movement that gains its name by adopting a specific color.

In response, a young Shanghai lady working in the U.S. posted two photos of Shanghai’s Pudong area in 1990 and 2010. In what was acclaimed as the “shortest yet sharpest” answer, she wrote: “From a poor and blank land to this in 20 years! This is my hometown! Do we look like we’ve been oppressed, brainwashed, and deprived of freedom? Do we look like we need a better government? Thanks for your advice, but China’s current system is functioning pretty well.”

Some in the international community have long embraced the empty rhetoric that the Communist Party of China(CPC)is autocratic and authoritarian. In the meantime, though, they find themselves caught in a dilemma: Why is China’s “anti-democratic” system, rather than fueling anti-government movements like the “color revolutions,” broadly supported by the nation’s 1.4 billion people? How could this system achieve such extraordinary social and economic triumphs in the face of devastating international events, like the global financial crisis and the COVID-19 pandemic?

The People’s Republic of China has been true to its official name, practicing a people’s democracy, not autocratic and authoritarian rule. China follows the principle of democratic centralism, combining democracy and central control in a way that has been effective in meeting national goals.

History has proven that democracy without centralization can lead to the radicalization of the system or even anarchism. China’s democratic centralism fully reflects the interests and expectations of the Chinese people, and ensures that national decisions are rigorously and effectively enforced. As President Xi Jinping has said, “This is our Party’s greatest institutional advantage.”

This is how it works. Leaders of the Party and national institutions at all levels are selected through competitive elections by representatives and delegates to the National People’s Congress (NPC), the country’s top legislature.

Democratic centralism in China is not only about an electoral and representative system, but also a decision-making process underpinned by consultation with representatives of the masses. Before convening the annual plenary session, the Central Committee of the CPC must consult with the eight democratic parties and the All-China Federation of Industry and Commerce before finalizing major decisions.

Furthermore, China’s institutional structure includes not only the NPC, the highest organ of state power, but also the Chinese People’s Political Consultative Conference (CPPCC) – a political mechanism unique to China. Apart from discussing draft laws and regulations before the NPC, the CPPCC can also hold consultative sessions on specific topics with government departments and proffer opinions and advice.

As President Xi has said, China’s democracy is a”whole-process democracy” rather than one that is expressed at election time only and is dormant otherwise.

In China, all major decision-making follows this broader democratic basis.

To avoid the radicalization of the system, the Party and leading national bodies, under democratic centralism, function on the principle of combining collective leadership with individual responsibility based on the division of work.

Members of a leading team are each designated specific duties, but major decisions must be made collectively. Each individual member can freely express opinions but must abide by the collective decisions taken.

In cases where individuals disagree with a Party resolution or policy, they can make a statement of reservation and present their views to a Party organization at a higher level, up to and including the Central Committee.

China can put in place a system that is widely supported because the CPC represents the fundamental interests of the broadest masses of the people.

The English word “party” means a group of people that acts in the best interests of certain groups of the population. The CPC, however, is not a party like this. The Constitution of the CPC expressly stipulates that “besides the interests of the working class and the broadest possible majority of the people, the Party has no special interests of its own.” This explains why the CPC could integrate democracy and centralism to serve the people.

For example, the fifth plenary session of the 19th Central Committee of the CPC held in October 2020 adopted the proposals for the formulation of the 14th Five-Year Plan for National Economic and Social Development and the Long-Range Objectives Through to the Year 2035. Before submitting the proposals, the CPC consulted with democratic parties and the All-China Federation of Industry and Commerce, and President Xihosted workshops to hear a diversity of opinions from a wide cross-section of society, such as entrepreneurs,scientists,and community-level representatives.

Opinions and suggestions were also solicited online, generating more than a million responses. Advice solicited through these workshops and online channels is essential to the decision-making of the CPC Central Committee.

Democratic centralism is, without doubt, China’s greatest institutional advantage. The fact that the system enjoys public support accounts for the country’s remarkable stability and the durability of the CPC to the evident dismay of critics abroad.

Li Junru is executive vice chairman of the China Institute for Innovation & Development Strategy and a former vice president of the Party School of the CPC Central Committee. You can contact him directly at [email protected] Please send any other contributions, including expressions of interest in sharing expertise with us, to [email protected]