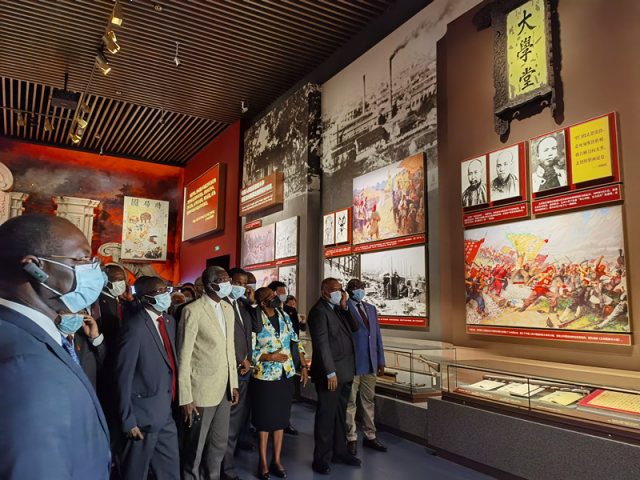 Over 100 diplomatic envoys of foreign countries and representatives of international organizations to China visited an exhibition on the history of the Communist Party of China (CPC) at the Museum of the CPC in Beijing on June 24.

Through the exhibition under the theme “staying true to the founding mission,” they got a better understanding of the extraordinary journey of the CPC over the past century.

At the exhibition hall for the site of the first National Congress of the CPC, they saw photos and manuscripts that bring back memories of the revolutionary practice of the CPC in its early days and felt the original aspiration of the CPC members.

“I saw how the CPC has struggled for its goals at the exhibition. The founding of the New China helped the Chinese people ‘stand up’,” said Ahcene Boukhelfa, Algerian Ambassador to China, who noted that every Chinese has the opportunities to realize his/her dreams today.

Through art forms including paintings, sculptures, music and videos, as well as technological means related to sound and lighting, the exhibition aims to bring immersive experience to visitors.

A glasses-free 3D animated film at the exhibition showed envoys and representatives vividly the Long March military retreat in the CPC history. They recorded the film with their mobile phones, then gave a big round of applause after hearing the interpretation of the narrator’s words: “Every generation has its own long march, and every generation must see that march through.”

Sudanese Ambassador to China Gafar Karar Ahmed pointed out that the CPC has led its people out of poverty and backwardness, and developed China into the world’s second-largest economy, sincerely keeping its promise to the Chinese people.

China’s experience in development belongs to both the country itself and the entire world, the Sudanese ambassador said.