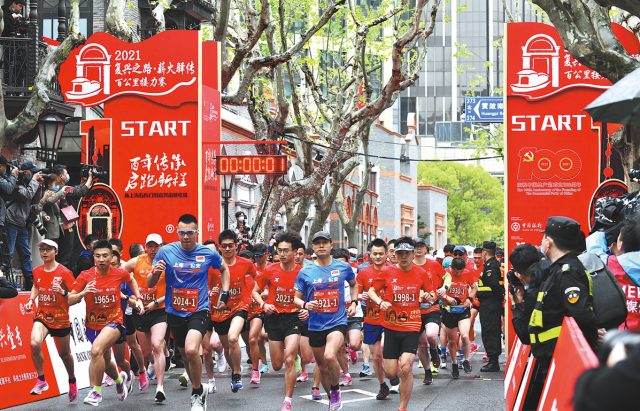 China is celebrating the centenary of the founding of the Communist Party of China (July 1, 1921).  Ever since 1949, the CPC has been the ruling party of China and, with its almost 100 million members, is the largest political party in history.

China has transformed itself into the second largest economy (measured by official exchange rate) and the largest economy (measured by purchasing power parity). It has become the biggest producer of agricultural products, manufacturing, iron and steel, cement, concrete, chemical fiber, automobiles, bicycles, desktop computers and mobile phones, as well as more than 200 major industrial items.

Every year, China, which has the world’s largest population, graduates more college students than any other country. It has rolled out the longest high-speed railway network and has pushed the urbanization rate close to 70 percent. Life expectancy, literacy, and the average height of the population are all on the rise. At the end of 2020, China declared that extreme poverty had been eliminated. It has committed to achieving peak carbon emissions by 2030, and carbon neutrality by 2060. The country is the largest contributor to United Nations peacekeeping forces.

China, the CPC, and the Chinese people as a whole have ample reasons and justification to take great pride in the transformation and modernization of China.

In historical terms, China’s great achievements are even more extraordinary in the sense that all these have been achieved peacefully through the hard work and sacrifices of the Chinese people, rather than through wars of aggression, occupation of other countries, suppression of other people’s rights, enslaving other nations, or plundering other countries resources.

Compared with the rise of the Spanish Empire, the Portuguese Empire, the British Empire, and the extermination of the native populations in America and the enslaving of Blacks for hundreds of years in the United States, and the rise of the Axis powers before and during the Second World War, China’s ascent has been peaceful, creating huge growth opportunities for humanity as a whole.

No one wants to invest in a country in turmoil and chaos. Wars and conflict eat away at a country’s wealth, generating no benefits for the people at large. Without development and without constantly improving livelihoods, stability may give way to chaos, anarchy and revolution.

If the real criterion for good governance and good government is of the people, for the people, and by the people, China should be ranked at the top for the tremendous transformation it has undergone and the spectacular improvement of the living standards of the Chinese people.

On top of that, China has now become a major champion of peace in the world and the pursuit of domestic stability for the sake of development. No country in the world has a monopoly on truth or has any right to impose its values on other countries. The better way is to respect each other and promote greater understanding and promote growth and development for the benefit of all, rather than engaging in plunder and exploitation of other countries.

China has been unique in identifying an extraordinary growth path for itself and has achieved stellar successes so far. Going forward, it will have greater confidence in doing the right things in continuing to promote stability, peace and development for the benefit of all humanity.

Victor Gao is a chair professor at Soochow University and vice president of the Center for China and Globalization. You can contact him directly at [email protected] Please send any other contributions, including expressions of interest in sharing expertise with us, to [email protected].