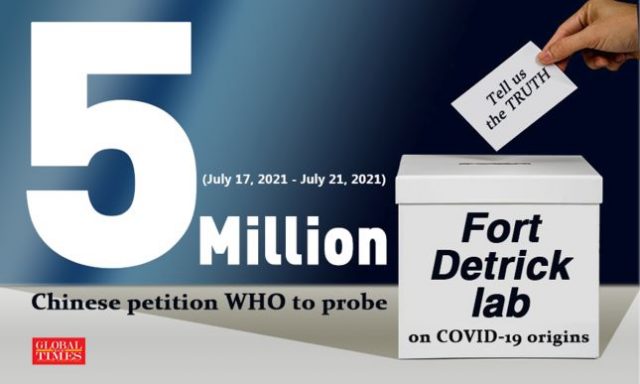 Over 5 million Chinese netizens had signed an open letter as of Wednesday demanding the World Health Organization (WHO) investigate the US’ Fort Detrick lab over COVID-19 origins. With the number still increasing, Chinese experts and officials consider it a vivid reflection of the collective will of the Chinese public, signaling the outrage toward some US officials who politicized the epidemic to shift the blame and who owe the world an explanation on US own flaws.

A group of Chinese netizens drafted the open letter to ask the WHO to investigate the US Army Medical Research Institute of Infectious Diseases (USAMRIID) at Fort Detrick, Maryland, and entrusted the Global Times with posting the letter on its WeChat and Weibo platforms on Saturday to solicit public response. It has gathered more than 5 million signatures as of the press time on Wednesday.

Investigating Fort Detrick is the call of people all over the world, including the Chinese people and it is a question that the US must answer when it comes to COVID-19 origins and a problem it can never circumvent, Chinese Foreign Ministry said on Wednesday.

In less than five days, about 5 million Chinese have signed the open letter, Chinese Foreign Ministry spokesperson Zhao Lijian said at Wednesday’s media briefing. The rising numbers are a representation of the anger of the Chinese people at the political manipulation by some in the US on COVID-19 origins, he noted.

To prevent the next outbreak, laboratories studying dangerous viruses and even biological weapons should be put into the focus of the WHO, the letter said.

The Fort Detrick lab, particularly, stores the most deadly and infectious viruses in the world, including Ebola, smallpox, SARS, MERS and the novel coronavirus. The leak of any of them would cause severe danger to the world, which also aroused the concerns and doubts about whether the SARS?CoV?2 virus that triggered the global pandemic is related to the lab, it said.

The letter was issued as the WHO on Friday proposed a second phase of studies into the origins of the coronavirus in China, including “audits of laboratories and markets in Wuhan,” calling for “transparency” from authorities, shortly after WHO head Tedros Adhanom Ghebreyesus appeared to succumb to the US-led West’s multiple layers of political pressure, calling on China to be transparent and open in further COVID-19 origins studies, according to observers.

Li Haidong, a professor at the Institute of International Relations at China Foreign Affairs University, told the Global Times on Wednesday that so many Chinese people signed the open letter, reflecting the true opinion of ordinary Chinese. “Over the past year, some US politicians have been slandering China on the question of COVID-19 origins, which triggered dissatisfaction among Chinese people. Such public opinion should not be ignored by the international community,” Li said.