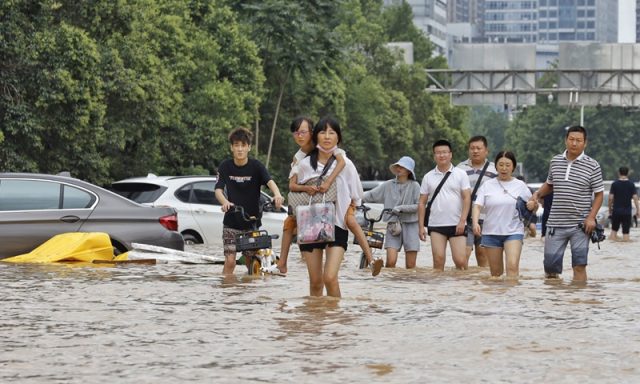 The rain stopped temporarily during the day in the hardest-hit capital city, Zhengzhou, allowing the provincial capital to breathe, deal with the aftermath before it faces more rain in the evening.

The downpour that could overwhelm almost any city’s drainage system prompted support from all over the country, as well as the central government’s swift response. Yet it also raises questions for government of all levels over their response to emergencies and ability to properly deal with disasters.

When Global Times reporters arrived on Wednesday, paralyzed Zhengzhou East Railway Station, which sees more than 600 trains a day, was flooded. Many stranded passengers were sent to safe places in the city and the station was distributing food and water to those still stranded.

Cars piled on roads, some low places were still inundated, and most businesses along the streets remained closed. A few pedestrians carefully walked on the wet, muddy streets.

Sludge on most of Zhengzhou has been cleared out, standing water on girder bridges also cleaned out, as the Global Times reporters arrived.

Yet electricity was still a luxury for some parts of the city as of Wednesday afternoon, when the provincial government held a press briefing to update the situation, noting emergent repairs for power lines were ongoing. A total of 468 out of 602 power lines haven’t been restored as of Wednesday night.

A downtown campus of the First Affiliated Hospital of Zhengzhou University was still out of power except for its ICU department. Some 600 critically ill patients were transferred to other hospitals as floodwaters, which devoured the first floor on Tuesday evening, had receded.

At least 25 people have died in Henan, with a subway inundated in Zhengzhou alone claiming 12 lives on Tuesday night. Gongyi county in Zhengzhou, 80 kilometers west of the downtown, reported at least four deaths after torrential rains caused a landslide, collapsing buildings and roads.