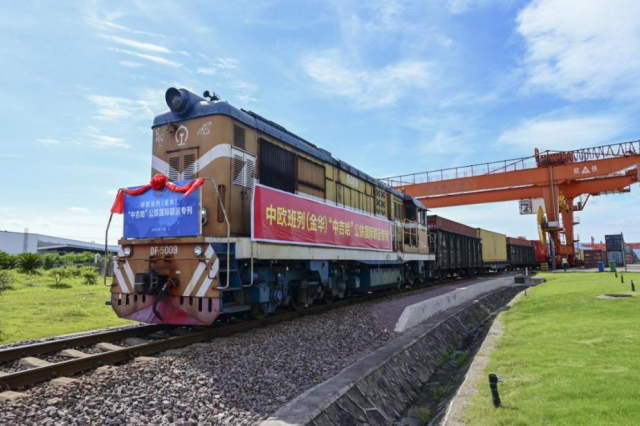 China-Europe freight trains, which feature long-distance transport of large volume of freight between different continents and countries, have seen its transport network extend to 168 cities in 23 European countries and become a global public good widely recognized by countries along its routes. In the first half of this year, China-Europe freight trains witnessed a rise in both its number of trips and quality of services.

Railway operator of Xi’an, capital of northwest China’s Shaanxi province, increased the number of its China-Europe freight trains from 41 to 50 during the first six months of this year. Xi’an continued to rank first in the country in terms of the number of train trips, the volume of goods transported, and the proportion of fully loaded trains.

During the same period, Horgos port and Alashankou port in northwest China’s Xinjiang Uygur autonomous region both saw their number of freight train trips to and from Europe and Central Asia exceed 3,000, with an increase in the volume of both imports and exports.

These rising indexes have reflected the rapid development of the China-Europe freight trains. According to data from China State Railway Group, China-Europe freight trains made a record 7,377 trips and sent out 707,000 Twenty-foot Equivalent Units (TEUs) of goods in the first six months of this year, up 43 percent and 52 percent respectively from the same period last year.

As the variety of goods becomes increasingly rich, the added value of products transported by China-Europe freight trains is getting higher.

In the first half of this year, a total of 1,079 trips were made by China-Europe freight trains departing from east China’s Zhejiang province, according to Chen Dengke, deputy director of Jinhua freight center of China Railway Shanghai Bureau Group Co., Ltd.

The number of containers transported from and to Zhejiang increased by 204.4 percent year on year during the period, and the composition of goods has changed from small commodities to high-tech products like automobiles and photovoltaic power generation equipment, said Chen.

After the outbreak of the COVID-19, export of Guangxi LiuGong Group Co., Ltd., a machinery manufacturer based in Liuzhou city, south China’s Guangxi Zhuang autonomous region, was affected for a time due to slow customs clearance procedures at both highway and waterway ports. Fortunately, railway operator of Nanning city, capital of Guangxi, reached out to the company and opened for it a new route linking Liuzhou city with Moscow, Russia.

“China-Europe freight trains can save at least two weeks of transport time compared to our past sea transportation and road transportation,” said Xue Bing, head of the international division of LiuGong Group Co., Ltd.