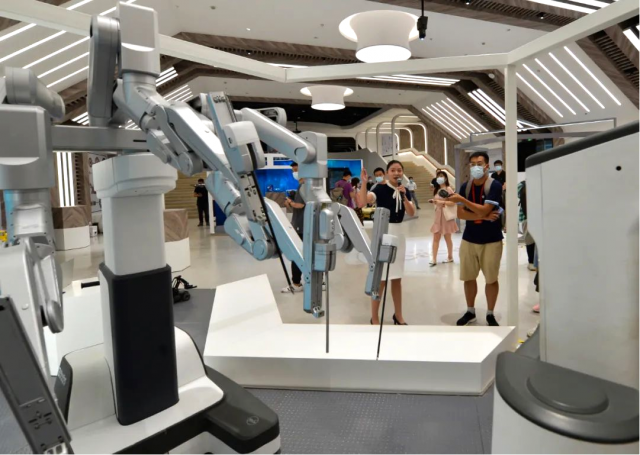 Pudong New Area in east China’s Shanghai municipality is ramping up efforts to grow into a more influential and vibrant innovation hub.

At a 1,000-square-meter experience hall of Zhangjiang AI Robot Valley of the area, where robots can perform a lot of tasks, including making coffee, conducting surgery, and solving Rubik’s Cube, visitors feel as if they were in the future world.

Although some industrial parks of Zhangjiang township are still under construction, many businesses have raced to set up offices in the place.

In July, Fourier Intelligence, a Shanghai-based technology company which has established overseas branches in cities including London and Chicago and exports products to more than 20 countries around the world, moved its headquarters to Zhangjiang AI Robot Valley.

In the first quarter of the next year, Swiss tech giant ABB’s $150-million gigafactory is expected to be comprehensively put into operation in Zhangjiang AI Robot Valley. In the future, a manufacturing mode featuring “robots making robots” will be created there.

One third of the AI companies in Shanghai are located in Pudong New Area. Last year, the output value of AI companies in the area amounted to 91 billion yuan (about $14.05 billion), accounting for 40 percent of that of AI industry in Shanghai.

After years of development, the area’s integrated circuits industry has covered design, manufacturing, package test, equipment material, and other links.

Biomedicine is also seeing all-round development in Pudong New Area, where there are almost all the key factors for growth, including talents, R&D institutions, innovation chain, and the industrial system.

On July 29, the government of Pudong New Area released its Group Open Innovation (GOI) plan, aiming to give play to large enterprises’ innovation resources and advantage of global innovation network and gather, cultivate, and incubate small and medium-sized sci-tech firms in the innovation chain for collaborative innovation.

The first 20 projects of the plan are focused on key industries and have been participated by well-known innovative companies including Johnson & Johnson, Microsoft, Baidu, and Commercial Aircraft Corporation of China.

Pudong New Area is now home to 966 R&D organizations set up by key enterprises and foreign-funded R&D centers, and the number is expected to exceed 1,000 this year. These R&D organizations and centers all have the potential to enjoy rapid development within a few years and realize explosive growth in their respective fields.

In addition, planning for 22 open innovation centers of large Chinese and foreign enterprises is underway in the area.

In 2017, China (Pudong) IPR Protection Center was inaugurated in the area. Over the past four years, the IPR protection center, which specializes in the management and protection of patent, trademark and copyright, has received more than 10,000 visits for consultation and provided services for 977 applicants.

An entrepreneurial team led by Wang Weifeng, a postdoctoral researcher who has returned to China after studying abroad, got approval of medical devices within merely 70 days.