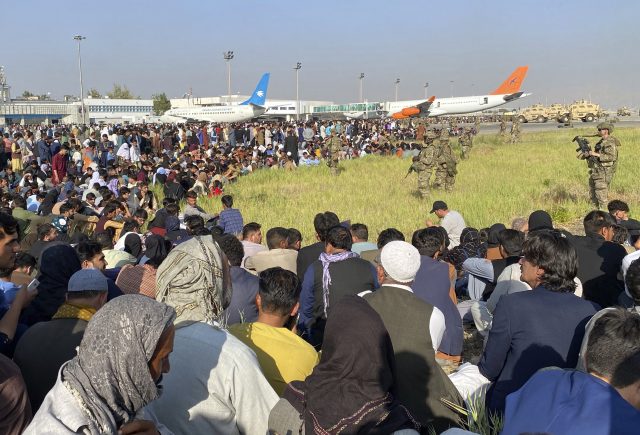 In The High Cost of Peace, by Yossef Bodansky in 2002, he made a statement that fits into the situation in Afghanistan since this week after the Talibans overran the country shortly after the US finalized withdrawal of its troops after 20 unbroken years of humanitarian intervention.

Bodansky had lamented “the bitter legacy of a peace process that has cost tens of thousands of lives, emboldened such outlaw countries as Iran and Iraq, enriched Arab militaries with billions of US dollars and mobilized an underground network of terrorist cells around the globe.”

Unfortunately, US keeps paying the high price every now and then. Again, unfortunately, it is self imposed cost in a bid to show power as world champion. Most times, these interventions are not particularly for peace.

From history, since its intervention or interference in Vietnam, US has done that 10 times and only two of them were at the mandate of the UN. The rest were unilateral show of force and military prowess by the powerful country which it often dubs rescue missions.

But the moves are better known in international law as humanitarian interventions which actually centre on the threat and use of military force by a state on another state to enforce an intended situation.

In the Vietnam theatre, after President J.F Kennedy mobilized 16,000 soldiers to the South Asian country as military ‘advisors’ U.S stepped into total belligerence in 1965 when Lyndon Johnson sent more troops after the Communist North Vietnam attacked US soldiers. It was so costly that in the late 1960s, U.S had at least 500,000 soldiers fighting in Vietnam at a whooping cost of $77b annually to the country.

The expedition was just to fight ideological spread, so that Vietnam that had got divided into two parts after her civil war with the north communist and south capitalist would not go total communist. Eventually, it ended in 1975 when US pulled out with the issues still inconclusive. Today, Vietnam is communist. Quite unfortunate.

Like in Afghanistan, after America withdrew her troops in 1973, Vietnam northern forces took the city of Saigon in the south and renamed it Ho Chi Minh. The capture came as fast as Talibans did in Kabul

The law says no

Every humanitarian intervention by a state in another state with the guise of going to resolve disputes or rescue descent into human rights violations as always or often cited as reason, but without the authorization of the United Nations, is a violation of international peace.

It is only on the invocation of Chapter VII of the UN Charter that the Security Council can rely on to order measures to enforce on a state international peace and security that may come by way of economic sanctions or military actions enforced through peacekeeping.

Since the Vietnam escapade, the U.S got really emboldened and hasn’t looked back as it continued to Granada in 1983. But before that, just as her Vietnam assault was on-going, in April 1970, President Richard Nixon ordered the military invasion of Cambodia. Panama was nest in 1989 with the eventual overthrow of President Manuel Noriega in January 1990; in 1990, it was Iraq that U.S invaded; Somalia in 1993; Afghanistan and Sudan in 1998. The attempt in Afghanistan was targeted at Osama Bin Laden who escaped death only to unleash blood cuddling terrorism on U.S years later. However, U.S and NATO staged another theatre in 1999.

Again in 2001, after the September 11, 2001 shocking terror attacks on U.S, in a justified retaliation, the country unleashed blistering bombardment on Afghanistan where Osama, a Saudi Arabia citizen till 1994, lived and operated from. That is the one that ended chaotically this week with the Talibans bouncing back just immediately.

In 2003, Iraq got another dose of this U.S tradition, as the powerful country had persistently deployed drones to attack and neutralize terrorists in Somalia, Pakistan and Yemen.

Libya was the next port of call in 2011. This was authorised by the UN and had NATO as part of the execution. It ended immediately Muamar Ghadaffi was killed.

This last time, the swiftness of the Talibans in retaking Afghanistan after 20 years the U.S military forces were there seems to prove wrong the unilateral use of force by any single nation. That confirms the UN law against unilateralism as wise since these actions, some of them bouyed by seeming good reasons never really enforced compliance in the involved countries or restored peace. In few of the states targeted, crises ended, yet in most others, even worse bedlams were sired and left festering as the foreign forces pulled out.

Today. Afghanistan is in the grip of the Talibans again as President Ashraf Ghani fled the country unceremoniously, according to him, to avoid altercation and bloodshed on the citizens. Afghanistan military offered no semblance of resistance while Talibans amassed forces.

Since the U.S forces retreated according to their plans, there have been reactions with some faulting the country, yet others questioning their continued stay in the country after fighting back the terrorists that attacked U.S.

To resolve that issue, President Joe Biden on Monday said the country was in Afghanistan to stop terrorists attacking U.S soil and not to run Afghanistan for Afghans.

Many U.S citizens had over the years questioned the continued stay of the country’s military in Afghanistan at huge costs to the country.

The estimation is that over 3,500 coalition soldiers died in the past 20 years in Afghanistan, and U.S with a share of about 70 percent of the number.

The BBC placed the military casualty index on the UK at 457.

A Welsh mother who lost her son in the Afghanistan war campaign told BBC as Talibans retake Kabul and other cities that she shed tears because the war might have been fought in vain.

Sarah Adams whose son, Pte. James Prosser, just 21 when he was killed in 2009 died in the war lamented that “it is absolutely heartbreaking. I have been following it avidly and hardly slept last night thinking about it, watching it all unfolding and feel absolutely heartbroken for the Afghan people and my son, James, and all the lives that have been lost.”

The emotions of the distraught mother summarises the futility of such interventions in history just like President Barack Obama later said he regretted sending U.S troops to Libya. The erstwhile powerful man on April 11, 2016 said his biggest mistake was failing to plan for the aftermath of Muammar Gaddafi ouster, a move that threw the country into chaos its dust hasn’t settled.

Whereas the world would not support the Talibans type of terror on the rest of us which spill-over spawned and emboldened other groups like the Al-Shabab in north east Africa, Boko Haram, ISWAP and more, but taking on them by foreign countries unilaterally should be thought through.

The best solution would still rest on the UN mobilizing for peacekeeping and tactical take over in order to restore planned and lasting peace.