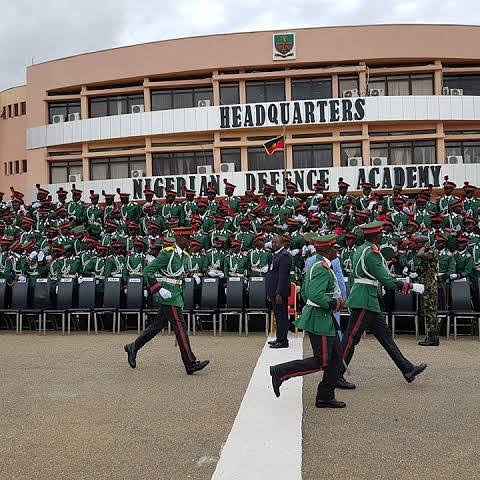 It was gathered that the gunmen, in the wee hours of Tuesday, stormed the NDA campus in Kaduna State.

Credible sources revealed that one soldier was also abducted by the gunmen, who first shot dead the two slain officers.

In an intelligence report sighted by PRNigeria, it states that said: “The bandits in their large numbers invaded the NDA campus in Afaka. They kidnapped one officer, and shot two. Another one was said to have sustained gunshot injury. He is currently receiving treatment at a military medical facility.”

It was gathered that two persons were arrested, though it could however not be ascertained if they are among the suspected gunmen.

The Director, Defence Information, Maj. Gen. Benjamin Sawyer, in a chat with PRNigeria, confirmed that there was a breach of security in NDA.

“Bandits at about 0215am 24 August 2021 sneaked into the large expanse of the NDA and went straight to the officer’s Quarters where they killed 2 brave officers who fought them to resist abduction. 2 other officers were reportedly abducted.

“The Commandant NDA and staff working in synergy with HQ 1 Div and the NAF are out tracking and on search and rescue mission. It is worthy to note that the Nigerian Defence Academy is a training institution and a citadel of academy excellent.

“The attack by the bandits must have been well planned following their aimed target area within the NDA permanent site complex. Efforts are ongoing to ensure the rescue of the 2 officers abducted and also to clear the bandits. We are in touch with NDA and as events unfold the press will be adequately briefed.

“We urge Nigerians and members of the Press to support the Armed Forces to put an end to this menace,” he said.