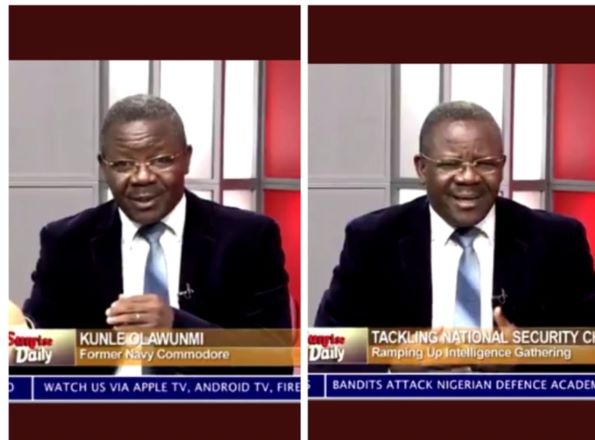 Retired military officer and former top intelligence operative has said that he knows people sponsoring Boko Haram and other insecurity in Nigeria who are in the present government.

In a discussion Wednesday morning on Channels TV monitored by ACE Magazine, Navy Commodore Kunle Olawunmi (rtd) said emphatically that as a high ranking intelligence operative who worked in the core of Nigerian security, he was always a member of the security and intelligence briefs at the Defence Headquarters in 2016 ans 2017, and has his information on good authority.

Olawumi revealed that in  2012 when people in his team interrogated captured Boko Haram operatives, they told them those behind the insecurity as sponsors of the terrorist group.

“I tell you that many of those I heard the terrorists mention as their sponsors are in present government as governors, senators and right inside Aso Rock.”

“I told General Olonishakin, (Abayomi Olishakin, Chief of Defence Staff) that we cannot solve the insecurity in the north the same way the Niger Delta insecurity was solved. The Niger Delta crises was solved basically by me. But I explained to them that Boko Haram was a different thing.

“At one of the intelligence briefings one day, we argued on the best approach where I told them we would need to look at the centre of gravity of the problem. Even Gen. Attahiru, the former Chief of Army Staff that died recently in plane crash was a member. So I told them after much arguments on what was the centre of the gravity. Some said we should go after the fighters because they were the main problem. Another opinion said the centre was Abubakar Shekau and that if we would get him, the problem would be solved. I opposed that view and said that the major issue or centre of gravity was those that sponsor Boko Haram. I also mentioned that solving the sponsors issue was beyond us because those sponsors were in the Buhari’s government and we knew them then. I was a military intelligence officer and all those that worked there on the same mandate between 2016 and 2017 knew we would not solve that problem because it was beyond us since that would involve arrests.

“To make it clearer, in April this year, the federal government announced it had names of 400 sponsors of Boko Haram and would prosecute them.”

That announcement was by the Attorney General of the Federal and Justice Minister, Abubakar Malami.

Olayemi further queried why it has proven impossible for the federal government to prosecute the people in the list of the sponsors who were related to bureau de change operations.

He also questioned why the government is acting partisan and makes it look impossible to announce these persons and put them on trial. He said these people are not the same with those in government.

“In 2012, we arrested some those Boko Haram fighters and I was always among those that interrogated them and these people we quizzed mentioned names of those that sponsor them. Many of them are presently in government. Some of them are governors, some are in the senate and some in Aso Rock. I can’t come on air and start mentioning names of those people but I am sure the government knows them. But the major challenge we have in the country regarding insecurity is religion.”

Olawumi said he was struck in 2017 the last time he visited the Nigeria Defence Academy (NDA) in Kaduna on an assignment by the Minister of Defence when he found that on Fridays at about 1pm, the gates of the NDA were thrown open for people from everywhere to come in for worship at the mosque there.

“I want to challenge the journalists to take up an assignment to visit all military formations in the country and they will find that the same thing happens at every military formation at 1pm every Friday. Even at the defence headquarters where I served at the intelligence unit for two years, there is very tight security. But every Friday, the gates of the Defence Headquarters are thrown open for everybody to come in from everywhere to do jumat even when they have mosques outside for their prayers. I have to tell you that that is the time the terrorists have the opportunity to size up our security system and know when to attack.”

He accused the president of deliberately not tackling the problem from the sponsors, insisting that Boko Haram can’t be handled by buying Turcano jets or changing Service Chiefs.

By Olawumi’s submission, “the security system, especially the DSS has so much information at its disposal, having worked with them through the directive of the then President Umar Yar’Adua. But when a fish is about to spoil it starts from the head. The body language of the commander in chief should make the security work with the intelligence it has or not.”

The retired intelligence officer noted that while the government has all the intelligence it needs to bring this problem to an end, the major issue is “this agenda to Islamize this country. To them, the end game is to turn Nigeria to Taliban kind of country and to them anything goes in order to achieve that aim. The sponsors and the Boko Haram operatives have an agenda to Islamize Nigeria and they are out for that. That is just all.”