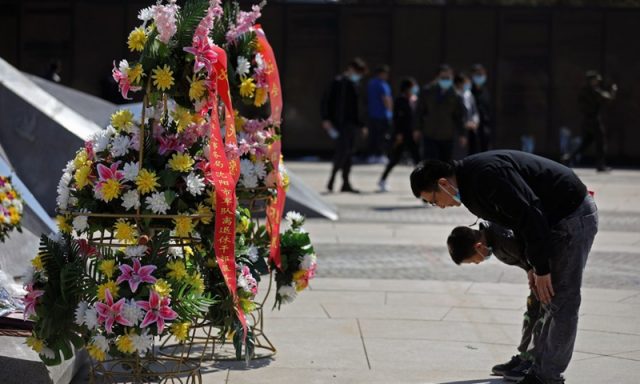 The eighth batch of remains of martyrs of the Chinese People’s Volunteers (CPV), who sacrificed their lives during the War to Resist US Aggression and Aid Korea (1950-53), are coming home. Carrying out such a handover as schools across China prepare for a new semester is of great educational significance and offers an important patriotism lesson for society, especially adolescents, according to Chinese authorities who oversee the event.

According to the South Korean defense ministry, China and South Korea on Wednesday held a ceremony at an army base in the western city of Incheon for the remains of 109 Chinese soldiers to return to the homeland, the Yonhap News Agency reported.

State broadcaster China Central Television (CCTV) reported on Wednesday morning that the Y-20 aircraft took off at 6:30 am on Monday for the mission. Servicemen have cleaned and maintained the aircraft to ensure it is in the most solemn condition to receive the remains of the fallen heroes.

According to the report, the Y-20 aircraft was installed with extra shock-resistance devices on the inside to ensure a steady ride. This is the second time that the Y-20 has been deployed for such a handover, following first time in 2020.

Together with the remains, 1,226 items such as notes and utensils the heroes left behind will be also brought back to China, CCTV reported.

A welcome-home ceremony will be held at Taoxian International Airport in Shenyang the same day followed by a burial ceremony at the CPV martyrs’ cemetery in Shenyang, it added.

Built in 1951 and renovated in 1999 and 2014, the 240,000-square-meter cemetery is the largest and highest-level site designated to pay tribute to the fallen heroes of the Korean War in China.

This is the eighth batch of martyrs’ remains returned since 2014, following a handover agreement signed by the two countries. The remains of a total of 716 CPV martyrs were repatriated in the previous seven batches, official data showed.

Xi made the comments at a meeting in Beijing to mark the 70th anniversary of the CPV’s entry into North Korea to fight in the War in October 2020.

The MVA stressed in the statement that the Communist Party of China Central Committee attaches great importance to patriotism education for adolescents, and the timing of the event in early September is meant to help youngsters fully understand the great spirits forged by the CPV in the War to Resist US Aggression and Aid Korea in their first classes of the new semester.

That is to “deeply comprehend the struggle that China has undergone to achieve the peace and stable current situation, to build up the willpower of striving to make progress and a strong work ethic, and to cherish the hard-won good life,” the ministry elaborated.

The MVA has worked with research institutes to collect DNA information on the CPV martyrs’ remains after they come back to China, continuing the progress in which four martyrs in the 2020 batch were identified and their relatives were found.

A veteran CPV serviceman who participated in the war reached by the Global Times on Wednesday said that such an event shows that the country and the Party still care for them deeply.

“Above all, we dared to fight the world power and claimed victory when we had no good weapons, and we taught the US, which was better equipped, what was a war of justice and what was one of injustice, of invasion.

“Invading other countries and killing civilians exposed the US’ true nature of being an imperialist bully, which is doomed to fail eventually,” he said.

“Nameless heroes have not only come home, they have also regained their names,” netizens moved by the good news commented online.

The MVA vowed on Wednesday to continue to improve and enrich the DNA database of the martyrs to support the effort to find their relatives.

Official data provided by the ministry showed that some 197,000 CPV soldiers were killed during the war. The South Korean side started remains-discovery work in 2020.

Lü Chao, a Shenyang-based expert on the Korean Peninsula issue at the Liaoning Academy of Social Sciences, told the Global Times on Wednesday that government agencies, be they military or diplomatic, have shown etiquette and respect to the fallen CPV soldiers, and there have been no problems in the handover process over the years, through which South Korea sent a friendly message to China.

The annual handover of the remains of CPV martyrs plays a very constructive role in the development of China-South Korea relations, especially since South Korea is under increasing pressure from the US and is forced to pick a side between China and the US, Lü said.

Generally speaking, the South Korean government and military do not blindly follow the US and they manage to preserve the friendly relationship with China, which deserves recognition and applause, he noted.

Observers said that apart from having strong economic ties, the two neighbors have more in common as they were both victims of Japanese militarism and invasion. They could show sympathy and support for each other’s requests for justice when handling historical issues, which is the basis of the further development of bilateral relations.