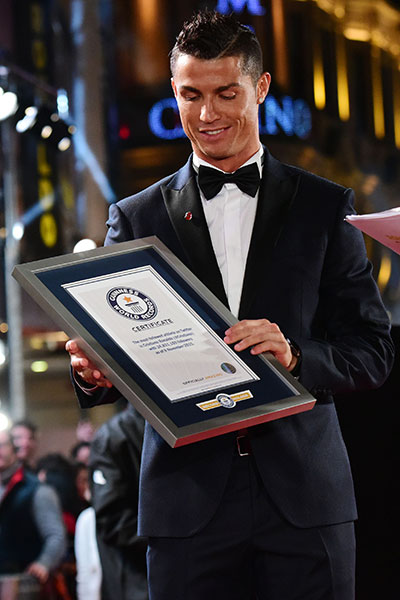 As the Guinness World Record (GWR) group honoured Portugal and now Manchester United superstar footballer with the awesome award of highest goalscorer in international matches, close to 30 million followers of the star have reacted on the social media.

Ronaldo who shared photos of the award where he held the plaque by the GWR has an amazing 149 million followers on his Facebook alone and within eight hours of sharing the photo, it had attracted over 2.8 million reactions and close to 500,000 comments.

Also on his official Instagram, the photo where he holds the plaque attracted  over 12,500,000 likes by Friday late afternoon, Nigerian time, while another where his photo-shopped image on bare top and in green Portugal football, airborne, had over 11 million likes.

There have been also some millions of reactions on the Manchester United, now his club, his last club, Juventus and Real Madrid where he made his most career success.

CR7 is the first footballer in the English Premiership history to win World Best Footballer during his early days in Man U. He repeated the feat four times over while in the Spanish La Liga playing for Real.

On Thursday, September 1, Ronaldo’s two goals at the Euro Cup qualifier between Portugal and Ireland took his tally to 111 goals, the highest in history of international football any player ever scored.

Before that September 1 match in Portugal, Ronaldo had shared highest scorer points with Ali Daei of Iran who led the pack with his 109 goals which Ronaldo equaled at the last EURO 2020 tournament before Portugal’s early ouster, even as Ronaldo still won the highest goalscorer of the continental tournament.

Ronaldo made his lofty feat within 2003 and 2021 within which he had played for his country, including in two World Cups.

The superstar popularly known as CR7 wrote on his facebook wall in reaction that: “Growing up, I’ve always dreamt of big things. And turning these dreams into reality required an incredible amount of focus, determination and grit. Stay #CLEARHeaded and never give up on your dreams so you can be the first you #BeTheFirstYou #ClearHeaded #ClearMen.”

The framed GWR plaque which Ronaldo displayed himself holding on his Instagram official page had inscription “The most goals scored in international football (soccer) matches by an individual (male)was achieved by Cristiano Ronaldo of Portugal 2003 and 2021.”