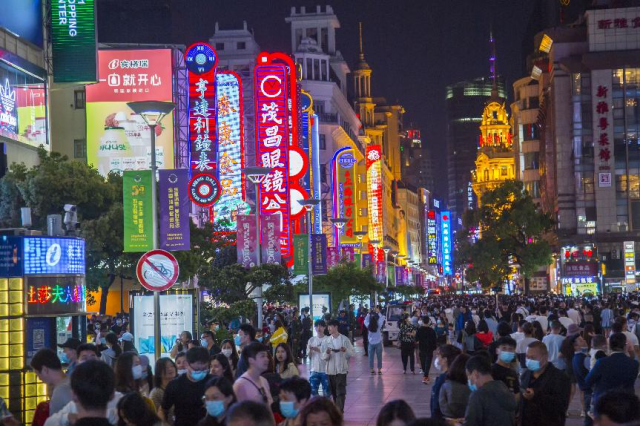 China will attract high-end brands and resources at home and abroad to megacities with a permanent resident population of more than ten million, and build a number of world’s top-class business districts in these cities based on their characteristics and urban renewal and transformation projects, according to a draft guideline issued by China’s Ministry of Commerce (MOFCOM) not long ago.

Metropolises of the country, including Beijing, Tianjin, Shanghai, Chongqing, and Guangzhou, have taken the lead in developing international consumption center cities with the approval of the State Council of China, said the MOFCOM.

Creating top-class business districts is in line with the consumption upgrading trend, helps promote upgrading and transformation of traditional business areas, and benefits businesses with the cluster effect, said Bai Ming, deputy director of the international market research institute of the Chinese Academy of International Trade and Economic Cooperation under the MOFCOM.

Building international consumption center cities and world-class business districts will help accelerate the construction of the new “dual circulation” development diagram in which domestic and overseas markets reinforce each other, with the domestic market as the mainstay, Bai noted.

In December 2018, Jiefangbei Pedestrian Street, also Jiefangbei Central Business District (CBD), in Yuzhong district of southwest China’s Chongqing municipality was listed among the first batch of pedestrian streets to be improved and transformed under a pilot project of the country.

The management committee of the Jiefangbei CBD then made efforts to upgrade the district from the green areas, traffic condition, exterior appearance of buildings, lights and other key aspects. The efforts have effectively beautified the district and improved the experience of visitors, thus making it more popular.

Today, visitors at the CBD can pay through facial recognition devices and have a flexible mechanical arm hand them the cultural and creative products they want. Stores on the pedestrian street provide customers with a great variety of products and become more appealing after the transformation.

“We held a lot of promotions in the past without knowing where our customers were, a pain point of traditional retail methods that has been solved by digital management,” said Wu Shengjun, deputy general manager of Shanghai New World Co., Ltd., which runs a shopping mall on the western section of Nanjing Road Pedestrian Street, a famous commercial street of Shanghai.

The shopping mall is developing and using a digital management system that provides real-time data on inventory and sale of goods, customers’ consumption habits, and performance assessment of employees, thus able to adjust goods structure and better meet consumer demands, according to Wu, who disclosed that the mall stores information about more than 200,000 products from over 500 suppliers in the system.

Last year, a department store on the east section of the pedestrian street became the first of its kind in the country to open an account for livestreaming show and introduce a sales model that shows counters in the store one by one online. As the host of the show saunters among the counters and recommends products in front of the camera, salespeople answer inquiries from online customers timely and provide them with the same services as those for offline customers.

Now the monthly online sales volume of the department store is about that achieved through online platforms last year, according to Ma Mu, manager of the e-commerce management department of the store.

Efforts to intensify interaction with consumers, operational monitoring, and release analysis reports on passenger flow, commercial activities, and brands with the help of big data technologies have provided strong support for businesses in further improving services, pointed out experts.

Business districts in cities are important platforms for promoting consumption upgrading as well as major engines for improving economic vitality of cities.