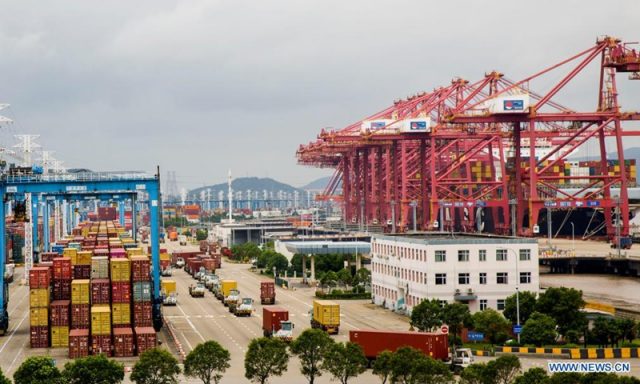 China’s exports and imports gained pace in August, despite soaring international freight rates and port congestion caused by the flare-up of Delta variant of coronavirus in the world, highlighting stable growth momentum in the country’s foreign trade.
An economist forecast that China’s foreign trade will grow by 25 percent for the whole year, given its presence at the core of the global supply chains amid the surging Delta infection cases overseas, which is likely to boost full-year GDP growth above 9 percent.
According to data released by the General Administration of Customs (GAC) on Tuesday, China’s foreign trade reached $530.3 billion in dollar-denominated terms in August, up 28.8 percent year-on-year and up 4.2 percent month-on-month.
Exports totaled $294.3 billion in August, up 25.6 percent year-on-year, beating market expectations of 17.3 percent. Imports totaled $236 billion, up 33.1 percent year-on-year, also above the forecast of 26.9 percent.
The surge in exports and imports reflected China’s irreplaceable role in global supply chains, which has been cemented by the country’s swift move in putting the latest Delta variant outbreak firmly under control, Cao Heping, a professor of economics at Peking University in Beijing, told the Global Times on Tuesday.
GAC data showed that exports of labor-intensive products grew 10 percent year-on-year to reach 2.46 trillion yuan ($381 billion) in the first eight months, indicating that COVID-19 outbreaks in Southeast Asian countries boosted their demand of Chinese products.
China’s exports to major trade partners sustained growth in the first eight months, with ASEAN remaining the largest trade partner, followed by the EU and the US. Despite political tensions between China and the US, their bilateral trade grew 36.6 percent year-on-year to reach $470.32 billion.
The hard-won result came amid high international freight rates and continued port congestion as a result of the temporary suspension of operations of a terminal at East China’s Ningbo Zhoushan Port – one of the world’s busiest cargo ports – due to a positive case of COVID-19 in early August.
It’s worth noting that the exports and imports of Chinese private companies posted faster growth from January to August, with their share seeing a continuous rise. These companies’ foreign trade reached 11.92 trillion yuan, accounting for 48.1 percent of the country’s total, up 2.3 percentage points year-on-year, the GAC said.

“As a major force in the country’s economy, the private sector taking up an increasing share of total exports will not only create more jobs but also facilitate overall industrial upgrading in the long term,” Tian Yun, former vice director of the Beijing Economic Operation Association, told the Global Times.
Tian said that economists expect an accelerated consumption peak in the second half of the year, but Delta variant outbreaks could delay its arrival, which means that third-quarter growth will rely more on infrastructure, high-tech investment and manufacturing.
Barring extreme conditions, China’s merchandise trade is expected to show double-digit growth year-on-year, and considerably exceed pre-pandemic 2019 level, to hit $5.1 trillion this year, Wan Zhongxin, director of the Research Center of the General Administration of Customs, said during the China International Fair for Trade in Services on Friday, domestic financial media outlet 21jingji.com reported.
Based on this calculation, China’s merchandise trade is expected to rise to account for 15 percent of global total, Wang said.
GLOBAL TIMES