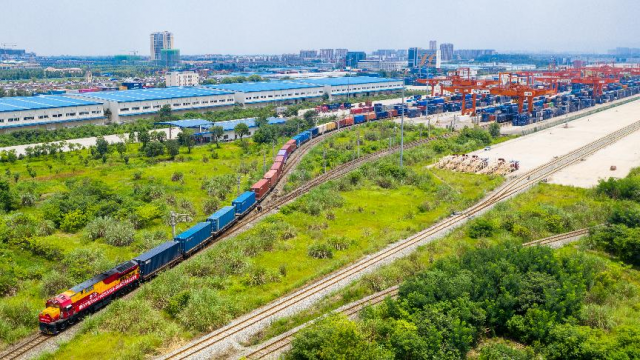 The China-Europe freight train service made its 10,000th trip this year as the train X8015 started its engine and headed for Duisburg, Germany from Wuhan, central China’s Hubei province on the last day of August, carrying auto parts, electronic products, daily necessities and anti-pandemic materials.

Statistics showed that China-Europe freight trains made 10,030 trips in the first eight months this year, sending 964,000 twenty-foot equivalent units (TEUs), up 32 percent and 40 percent, respectively. Loaded containers accounted for 97.9 percent of the total.

According to him, China-Europe freight trains have made over 1,000 trips in each of the past 16 months, and the monthly number of trips has been kept above 1,300 since May this year. The service has made positive contributions to stabilizing international industrial and supply chains and promoting the “dual circulation” development pattern.

The 10,000-trip milestone this year arrived two months earlier than that a year before. Behind such performance were optimized management, improved efficiency, and expanded handling capability of ports.

“We have constantly optimized our working procedure, shortened the time of transshipping,  improved efficiency, and made good use of digital platforms,” said Gao Qiang, deputy director of the cargo-loading workshop of the train station in the border city of Alashankou, northwest China’s Xinjiang Uygur autonomous region. Over 4,000 China-Europe freight trains have passed the Alashankou port his year, he added.

Since the beginning of 2021, the ports in Alashankou and Khorgos of Xinjiang Uygur autonomous region and Manzhouli of north China’s Inner Mongolia autonomous region have successively launched expansion and upgrading projects, which has significantly improved the handling capacity for China-Europe freight trains.

“China-Europe freight trains have significantly counteracted the impacts from COVID-19 for enterprises and become a regular logistics channel for our deliveries to European clients,” Wang said.

Since this year, local railway departments have enhanced communication with foreign trade enterprises to learn their logistics demand, and issued targeted plans of transportation.