Leader of the Indigenous Peoples of Biafra (IPOB), Mazi Nnamdi Kanu on Thursday pleaded not guilty to the charges of treason and terrorism preferred against him at the Federal High Court Abuja.

Kanu took his plea at the re-arraignment before Justice Binta Nyako after delayed and postponed plans to bring him to court and said he was not guilty of any of the seven amended counts filed against him.

Kanu was intercepted in Kenya and brought back to Nigeria at the end of June and eventually brought to court today.

At the hearing, his lawyer, Ifeanyi Ejiofor applied to the court to transfer his client to the Kuje correctional facility instead of the custody of the DSS where he has been detained without access to his family and even lawyers.

But the court did not grant the application.

Outside the court, Ejiofor told journalists that he was not pleased with the way Kanu was arraigned which he said wasn’t open as journalists were totally banned from the courtroom.

He complained also that even his team of lawyers were stopped from accessing the courtroom and only him allowed to be there.

He cautioned the Nigerian government to make sure that Kanu’s trial is made open to the whole world to see and should not be a clandestine affair.

He further asked that the federal government should not be allowed in law to benefit from its wrong as Kanu was illegally abducted from Kenya and forced back to Nigeria for trial.

Before the short court proceedings today, one of his lawyers, Aloy Ejimakor had complained bitterly outside the courtroom that he would not accept to go into the court alone as the rest of the lawyers in Kanu’s team were barred from the trial.

He said the approach was not acceptable in the delivery of justice and doubted if the FG had plans to make the process credible.

Many Igbo leaders, lawyers, politicians were stopped from getting into the court to witness the trial.

Some of them included Dr. Emeka Ezeife, former governor of Anambra State, Eze Nd’Igbo Abuja, Eze Gibson Nwosu, Senator Ifeanyi Uba of Anambra State who had applied to the court to enable him to meet Kanu in detention.

Many lawyers and journalists expressed their displeasure with the security style of barring them from a trial that has every ingredient of politics and sentiments and asked the judiciary and the security system to make sure that does not repeat in Kanu’s next adjourned hearing. 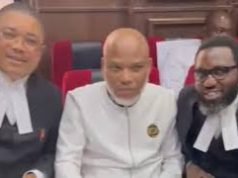 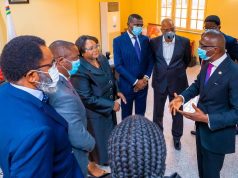 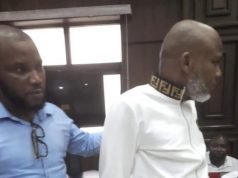