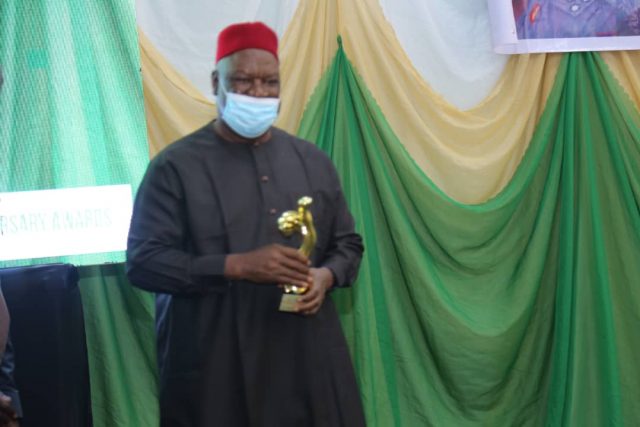 A retired Justice of the Supreme Court and Emir of Lafia, HRM Sidi Bage, has recommended frontline presidential aspirant, Senator Anyim Pius Anyim as a capable hand to solve the problems of Nigeria.
Justice Bage stated this on Thursday in Abuja at the Awards/Honours Symposium organized by The Nigerian News to mark the 5th anniversary of the media outfit.
He said that after listening to the former President of the Senate’s speech at an award ceremony in Lagos recently, he was left with no doubt that Anyim understands the problems of Nigeria and that he is capable of fixing them.
Bage described the former secretary to the government of the Federation (SGF) as Nostradamus who has seen and understood what Nigeria should be in future.
“He knows what Nigeria should be today and tomorrow”, he insisted urging, “let all Nigerians read that speech.”
“He (Anyim) made me believe that we still have leaders into whose hands we can entrust Nigeria.”
Bage, himself one of the awardees commended the organisers of the award for recognizing the leadership qualities in the PDP presidential aspirant.
In his goodwill message, Anyim lamented that Nigeria is operating like a nation without dreams and urged those in leadership positions or jostling for leadership to do everything possible to regenerate the Nigerian dream as well as the consciousness to drive the dream.
While thanking the award organisers for the honour done him, Anyim assured Nigerians that he would not disappoint them.
In his speech, the publisher of the Nigerian News, Chief Philip Agbese said the awardees were selected based on track record of performance and service.