Two Igbo chieftains of the main opposition party, the People’s Democratic Party (PDP) have advised that the members from the South-East zone should accept the position of the party and remain in the contest.

This was in response to the National Executive Council (NEC) announcement that it has thrown open the presidential contest, thereby jettisoning zoning that was earlier anticipated and also expected to have fallen in favour of the South East.

The two party leaders who spoke separately to the ACE Magazine in reaction to the development reasoned that even though the party didn’t decide as expected, it would still not be easier or politically wiser for the Igbo members of the party to leave.

Hon. Irem Ibom, a former member of the House of Representatives on the PDP ticket noted that PDP, coming from the opposition may not have what it takes to be rigid on zoning the ticket.

“I seem to understand the position of the PDP NEC on this because they are coming from the opposition. You don’t zone or control what you don’t have on your hands. Their consideration is to take all along because to them, from the opposition, zoning will alienate some followers and not assist them to clinch power. That is the dilemma that the party has. It is a dilemma as I call it because much as the party is stuck and won’t zone to the South East, the South East is not happy and everybody knows the zone is maltreated by the arrangement. All factors of fairness point to the truth that the zone deserves that ticket. So, it is a decision that doesn’t go down well with people of our zone, no doubt.

I guess that the consideration of the NEC is that if a candidate emerges through an open and fair contest, the rest would give full backing to such to win. The NEC didn’t rule out consensus should the 15 candidates agree to that later. Since there is no rigid position yet, it is still a possibility that the aspirants might agree among them to cede the ticket to a candidate from South East or such can win it from an open contest.”

Regarding the Igbo continuing in the party or going alone on another party platform, the former Rep prefers that the South East remains with the PDP and fight it out until such a time the party would have no choice but accept that the Igbo must equitably take a shot at the presidency as one leg of the tripod.

“In politics, it is better to fight from inside than outside. Yes, we have independent and fair-minded leaders who have been outspoken especially among the Yoruba who feel the Igbo should on fairness have the ticket in the PDP and APC, but they may not be the ones that control the political levers to influence how voters cast their ballots.

They all mean well, the Igbo truly appreciate their truthful stand. But they may not be in the right position or with the powers to determine a voting pattern. It is unfortunate, but true that politics is a self-centred business, so those free thinkers who elevate fairness won’t be the controlling force in voting. They exist in all parts of Nigeria, but while their goodwill counts a lot, fighting from outside might not be the best option for our people. I would prefer that our zone remains with the PDP no matter the outcome.

It is also possible that the delegates may act reasonably and vote an Igbo aspirant as the candidate and should that happen, then there would be a stronger position to contest from.”

Ibom, however, argued that “since the political class has invariably dropped power rotation just because it was the turn of the South East and they want the zone shortchanged, it would be proper that the Nigerian system totally drops all policies of inclusion otherwise known as the federal character. Those that had benefitted from zoning in the past argue today that what is needed is quality persons to lead the country. Much as I know that no singular part of the country has any exclusive endowment to produce good leaders as argued, then let us go full blast on meritocracy. In our education, political, economic and other sectors, let Nigerians be appointed on proven quality and merit from now.”

To Mr. Ferdinand Agu, an architect and senior member of the party, what the NEC decided simply means: “We know it’s your turn, but we won’t give it to you. But I know that it’s not yet over until it is over. Let the delegates do what they are all supposed to do. Hope is not yet lost as I would encourage all our brothers in the contest for the ticket to give the race their best. Since NEC said that consensus is not ruled out, who knows what may come up tomorrow.”

The former Director-General of the Nigerian Maritime Administration and Safety Agency (NIMASA) said, however, that “any party that corrects that injustice for the Igbo would be appreciated. If the APC decides to give the ticket to the South East, we won’t forget such favour. I am one of the people that in the past petitioned the PDP leadership that the South-East should not be denied the party ticket, so I don’t mind if the APC corrects that.”

Regarding the fate of the Igbo in the PDP, whether to leave due to this said denial, Agu would not agree.

He said: “I don’t advise that we go alone on another platform because only these two parties have what it takes to win at the centre. I wish we stay and our presence would someday be an albatross that as they hold the Igbo down, nobody is up. I am one of those that had petitioned in the past that the PDP should ensure they give the slot to the South East, but politically speaking, it would be better if we remain. If we consider opting out, to where exactly? Even APGA has not won more than one state in our zone. That would not be a better political option.” 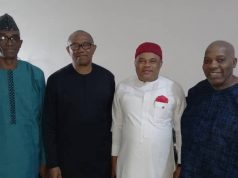 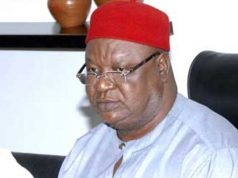