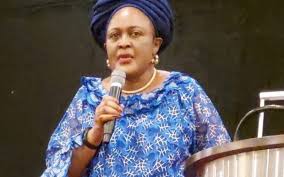 Justice Mary Ukaego Odili retired from public service on May 12 as justice of the Supreme Court. That is Nigeria’s apex judicial institution and Odili is one of the few Nigerian women to sit on the Bench of that court.

She has been a jurist for most of her career years, and had rather been just seen and not heard as the rule of her job required.

As she bowed out of service, she used the occasion of the valedictory session for her exit to speak up and be heard for once, now as a private citizen and by reason of her age of 70, an elder and senior citizen.

Here is the full speech which we publish for the records.

Upon the attainment of 70 years at midnight on this 12th day of May 2022, I will be more comfortable speaking a little on my life and current affairs. My judicial life’s journey is already in the public domain and can be discerned from my judgments from the Magistracy to the Apex Court bench and the mistakes found in them are of the head never of the heart as I do not delude myself on perfection which is the exclusive preserve of the Almighty God.

At midnight, I attained 70 years by the special grace of God and upon that happening, I have broken into the select group of elders of our nation. It, therefore, behooves me, of the duty to speak with the platform open to me today as a retired justice of the Supreme Court of Nigeria. I intend to do so with the concept of taking the option of “dying on my feet than living on my knees”. A postulation of Emilio Zapata Salazar, the Mexican leader in the Revolution of 1910-1920.

In the spirit of one who has lived through a lot of experiences and accosted by knowledge, good and bad, I will talk to my countrymen, women, and children loud and clear. As I had earlier mentioned, I lived through the Nigerian Civil war which was precursed by the January 15th, 1966 Army Coup and later the July 1966 pogrom as it was referred to. In the July incident, I saw with my eyes, men running in their underpants with or without singlets from the Ikeja Army Cantonment which presentation made us leave our home at Ikeja GRA as the killings moved from the Igbo soldiers in the barracks to the civilian population of the Igbo. We had to take refuge in a room in Surulere and later to the East and the follow-up war that was incepted in 1967. During the war, we survived the air raids with the bombers and fighters as low as the height of fruit trees with I catching the eyes of one of the pilots on an occasion. I am bringing this period up not to whip up animosities or negative feelings but to call to the mind of all and sundry the emergency situation which now faces our nation. Some of the actions or speeches that propelled the unfortunate war which took the lives of millions of our people are being re-enacted at this time hence the necessity for this reminder.

I am delving into this area of our national life in the light of the saying that while one ought not to hold on to the past but must move forward, the lessons of the past should not be dispatched to the dustbins of history but utilized positively to navigate the present and future.

I have noted with sadness that some of the good initiatives of the war zone and the potentials of persons old and young of that period have been thrown overboard hence the misfortunes that beset the Nation even at this point in time with the authorities and individuals looking helplessly on.

That is not the way to go as those good creations and capacities ought to have been deployed as happened in other climes to their advancement. A case in point is the skills acquisition programme which helped in the survival of a lot of people including the speaker.

In that regard, I call to mind what I saw when watching the television in the 1980s, the efforts of Maryam Abacha as the wife of the Chief of Army Staff instituting skills acquisition in army barracks for wives of soldiers. It was Maryam Babangida that orchestrated the programme up to every Local Government Area of the Country down to the Community level. The programs were later to be propelled under the Family Support Programme. I bring these efforts up because what seems to be happening in our polity is that in denigrating the spouses of those women, the laudable efforts they had espoused and championed are left unattended but treated as NGO affairs or women’s pet projects instead of having them given full steam by Government at all levels, with success assured and the current menace albeit emergency situation of unemployment with the attendant insecurity that has followed. The millions of idle youth is not unrelated to the insecurity on the ground.

The urgency of what we are all faced with right now calls for the necessity or immediacy in tackling them. The matter has become a behemoth of sorts that needs no further delay in solving. That is the reason that I propose that the Head of State should take on the garb of Minister of Youth, Employment and Social Welfare or such related name so that he directs the implementation of what is called for and put in place without middlemen, utilizing the assistance of adequate and qualified personnel. Similarly, the Governors of the respective states take over such ministries as the situation is needed to be done to stem the current tragic situation. The massive unemployment of tertiary institution graduates is the tip of the iceberg as the conditions of the non-graduates who are numerous in number have made the matter of grave concern. The situation is not helped by the perennial strikes which leave students roaming for months on end or idling away with their thoughts better imagined.

I have brought this up because the solution I proffer was tried out in Rivers State and it worked hence I implore that it be tried once more but this time nationally and with urgency. The Government of Rivers State, Dr. Peter Odili did it from 2005 to 2007.

Again an area that should be given consideration is the retirement of our uniformed men and women, military, and police, in their prime with the expertise and high degree of training obtained nationally and internationally. This retired personnel that is now too numerous and left to rot at their various homes with their knowledge not utilized is a matter worthy of attention by the authorities which the apparatus of Government can factor the use or uses for these highly trained individuals to the benefit of all.

I come to another point of anxiety, the matter that has been resonating for some time, “Restructuring”, I cannot say much on it as I know little on the subject. However, my concern stems from the fact that some of the people who have been harping on it are very serious men with the acuity of intellect, accompanied by their respective track records that resound and so my humble view is that the issue should be given immediate attention lest we ignore the matter at the risk of a lost opportunity to set the ship of state on the right course. While studying the English language, our teachers told us that “a stitch in time saves nine”. In our own locality, the Igbo say “Anyi choo ewu oji na ihe” which translates as, “Let us search for our black goat during the day”. The reason for this adage is that if the goat is not looked for during the day, it blends with the dark at nightfall.

The last area I bring to the burner is the matter of state of origin of individuals in our country which is gauged from the locality of birth of the parents. That a person was born in a place outside the locality of origin of his parents, grows up in this new location, resides and works there in whatever trade, and is still considered a stranger has negative connotations in my humble opinion. Therefore I posit, that a person’s state can be gauged by the number of years he has lived in a given place and his choice.

The follow up on this matter of state of origin or residency and the import thereto have thrown up the fact that the women have seen themselves taking the short end of the stick on account of marriage outside the state of their birth. These are matters that need urgent attention in our journey of nationhood and the building and sustaining thereof.

Having put across these views from my position in the Council of Elders, I would now state with thankfulness to God, that I have enjoyed the goodwill of our compatriots from all spheres of human endeavor which was showcased when our home was invaded by persons whose mission and sponsors remain unclear. In that regard, my gratitude goes to all who identified with our family and the role in the resistance played by His Excellency Nyesom Wike, Governor of Rivers State, and his team and the security operatives at our residence is deeply appreciated.

It is difficult and humanly impossible to mention the names of all, the media, individuals, groups, communities, leadership, and members of the National Assembly that identified with our family.

I say on behalf of the Peter Odili family, May God bless you all and send helpers to you in your time of need.

The grace of God has been on full display in my life which out of His making has taken very dramatic turns hence my unending terms of gratitude to God and man. It is from the Almighty that I got the great fortune of being granted a wonderful special man named Peter Otunuya Odili from Ndoni in Rivers State who has showered me with love and all the material luxuries at his disposal.

He further placed me in a family where the members of the enlarged Odili did not see me as a newcomer but as an original member and his brothers, their wives, and sisters took me as a sibling. I use this opportunity to redeclare my everlasting love to you, my beloved husband.

My gratitude is also to our children and their spouses. My thanks to Mr. Sylvester Nzenwa, the current head of the Nzenwa family, my uncle Dan, head of the Chinyere family, the Odili enlarged family, General Peter, and Rose Adomokhai. I am also grateful to our beautiful eight (8) grandchildren as we pray for more.

Blasphemy in Islam: Positions of justice system and Quran